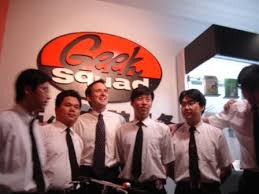 The continuing saga of my recent computer issues.

The Geeks looked at my computer and informed me it would not turn on.

The Geeks told me that it is a bad idea to download MS-10 to an older computer.

It was determined that I had to purchase a new laptop.  I picked out one that was a nice size and didn’t have any bells and whistles that I would never ring or blow.  The price was fair and they also offered me a back to college special to save $150.  I let them know I was not going back to college, I was lucky to get out 48 years ago.  I was assured I qualified, everyone qualified.  I asked why don’t they call it an everyone special.

Mrs. C called me a jerk.

We made the purchase, but it was not in stock.  It would be three days for delivery.  Many of you will understand that three days without a computer is like nothing but bottled water to an alcoholic.  I spend 10% of my time playing guitar, 5% playing golf or exercising (ok 1%) 50% of my time eating or sleeping and 35% of my time on the computer and or watching TV.  Three days is forever.

Then I started whining about losing my files and all my favorites.  The Geeks assured me they could restore the files and my favorites.  When the new computer comes in, bring it to the geeks with the old computer and they will transfer all the good stuff in about an hour.

After three days the computer came in.  I took the old computer to the Geeks and told them what I wanted.  I was told just get the new computer and it would be done in three days.  “THREE DAYS?”

Like the Hulk turns green and mean, Cranky turned into SUPERASS!

Yes, SUPERASS…a wild idiot screaming at millennial Geeks, and who disguised as a cranky old man stands for truth, justice and I WANT MY WAY!!

After my tantrum I left the Geeks to “pick up” where my new machine was waiting.  “Pick Up” was 12 feet from the Geeks.  I got my new computer in about 2 minutes and went back to the Geeks where there was now a 20-minute wait.

SUPERASS was warming up again when the manager approached me.  I whined some more telling him if I knew it would take another three days I would have bought a dipstick thingy and had it downloaded and ready for me today.

The manager was good at customer service.  He took off $50 and promised to push the process.  I thanked him, apologized to the very nice young Geek lady and told the Manager to give her a raise for putting up with me.

Late that afternoon I got the call, my new computer was ready.

I went back to Best Buy and waited at Pick Up.  Pick Up told me to go to the Geeks…10 feet away.  There was no one at the Geek area, but I could hear inside a curtain what sounded like a gaggle of Geeks.  Five minutes and no one came to help me.  SUPERASS was boiling over.  I went to the curtain that said employees only and asked if it was possible to get some assistance.

A Geek came out and he came out with attitude.  He went back behind the curtain to check on my computer and I heard, “That’s the guy I was talking about!”

When he came back he did not have attitude.

The computer is nice, the Geek went over it with me, and all my favorites were right where I wanted them and my files were all saved.

I got home happy, needing to only call Norton to download their protection (I practice safe computer) and then download my MS-Office07 from an old disc.

When I checked the files that they saved I found many files were empty.  Files are great, but it was what was in them that I needed.  I still have the hard drive and perhaps they could still restore the files correctly, but I am done with the Geeks, I can restore the files it will only take time and I have plenty of that.
I then tried to download MS-office from my old disc...WHAT THE HELL! New computer don't accept discs.  Shit, now I have to purchase MS-office again.

Next “One of these days Norton, bang zoom to the moon!”
Posted by joeh at 9:05 AM