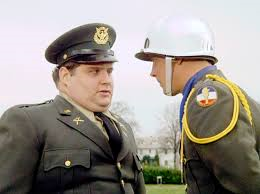 Fishducky recently blogged about her Husband, Bud, being an officer in the army after going through ROTC (Reserve Officer Training Corp) in college.


My first year in college I learned that ROTC was required for two years.  Even if you had no intention of serving in the army, freshman and sophomores were required to take ROTC.


I had enough trouble with calculus for dummies, a required course in religion and a foreign language; all subjects liberal arts students had to take and that I never expected to use.  I really did not want to learn to march, salute and shoot.  Remember “Animal House?”


It turned out that before entering college my doctor gave me a physical exam which showed I had a heart murmur.  The college physician gave me a test and could not find a heart murmur, and none has ever been detected since.  Still he gave me a choice of skipping ROTC and taking gym instead.


I opted for gym.


Our gym class enrollees were all ROTC rejects.  We took archery, which I sucked at, constantly ripping my arm with the bow string, golf, basketball and football.  I was a decent athlete in high school; I should have excelled in this group of diabetics, fat people and cripples.


I was ok, but the best athlete in the group was a kid with one and a half arms, the result of a thalidomide pregnancy.  How this kid could shoot an arrow, swing a golf club, and catch a football with one arm and a flipper was amazing.  His basketball skills were incredible.  He could fire up a swish from anywhere on the court and dribbled circles around the defense.


I never learned to shoot an arrow, I am still only an average golfer, in football I could block but not catch and throw.  As a basketball player I perfected the air-ball.


I didn’t learn to march, salute, or shoot a gun, but I sure did learn to respect the incredible things a handicapped person can do when he sets his mind to it.


Probably one of the best lessons I learned in college.
Posted by joeh at 10:23 AM