I have been chastised for throwing away a used paper towel.  “There was still some clean up left in it!”


I have been shunned for tossing a Popsicle stick. “I may need it to prop up the plant on the window sill!”


I have learned to leave a glass with two ounces of water covered by a paper napkin alone.  “I wasn’t done with that water...and what happened to the napkin!!?”


In our garage we have a 29 year old stroller/ baby carriage, state of the art in its day, garbage today, because “One of my kids may want it someday!” (No way in hell)


I almost tossed a VCR tape re-winder away…OMG did the you-know-what hit the fan.


So when I saw this in the dish drain next to the sink, did I throw it in the trash? 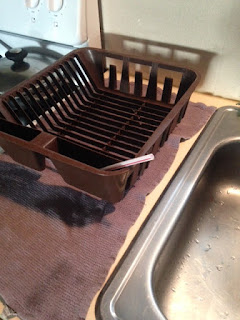 I may be a slow learner, but eventually I do learn, I left it to dry.