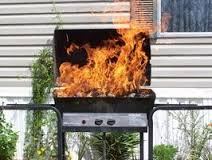 Our place at the Jersey Shore is a small apartment underneath Mrs. C’s Aunt’s really nice house about 50 feet from the beach.  One extra plus in this really sweet deal is that Aunt Catherine allows me to use her bbq grill off her back deck.  The negative is that it is a 30+ yard walk over stones (very painful to bare feet) from the apt. to the grill. Not awful except bbqing is like fixing stuff around the house, you always forget something and instead of multiple trips to the hardware store you make multiple trips from the Apt. to the grill.
Anyway.
The other night I was grilling chicken.  While I was tending the chicken pieces, Mrs. C came around back and took the plate which I used to transport the chicken.  She wanted to bring back a clean plate.  While waiting for a clean plate, the grill started to get hot, really hot, fire hot.
I quick turned off the grill and hollered for a plate so I could remove the fat dripping chicken which was feeding a fire.  There was no response to my request.  The house next door was enjoying cocktail hour but became a bit alarmed at the fire that was pouring out of the closed grill.  Two grandchildren and a friend who were playing out back spotted the flames.
“Hey dude, you have a problem.”  No shit Sherlock.
“Grandpa Joe, do you know how to cook?” Grumble grumbler grumble!
At this point the chicken was toast, I mean it was actually toast.  The bigger problem was the grill was close to burning down Aunt Catherine’s deck.  If that happened she would probably never rent the Apt. to us again.  The house next door was close enough for them to be concerned for their multi-zillion dollar home.
I was border line panicking when I ran for a hose that was on the deck.  I turned it on and raced back to the grill.  The hose did not reach; it was looped around a hose ring thingy.  I started to swing the hose like a jump rope to unwrap it from the hose ring thingy.  Still not long enough.  I continued to play jump hose until the water flow finally reached the grill.
The fire was extinguished; the deck, house and the house next door were none the worse.  Dinner was just a phone call away.
Upstairs-cousin Mike later said he saw the jump hose routine from inside the house but did not realize immediately there was an emergency.  When he did see what had happened, he later informed me, he did not think it was the right time to tell me that my panicky jump hose routine was one of the funniest things he had seen in a long time.  I may have been exhibiting signs of being a little agitated.
Before I use the grill again, it is going to receive a major cleaning.  Apparently a year plus of grease build up in a bbq grill can become a little dangerous.