Go-Karts and Doodlebugs - a cranky re-run

I watched an episode of “Leave it to Beaver” today that I’d never seen before.  This is my favorite old TV show as it captures life in the 50’s that many people today would not believe existed.  These were times of six year olds roaming around town without parents knowing where they were.  These were days of stickball and touch football in the streets.  These were days of sex education taught by older kids and finding out that girls could get pregnant if you both used the same tooth brush.

In the 50’s mom vacuumed in a dress and had her hair done once a week at the Beauty Parlor.  Dad ate dinner in his suit and tie, and the children ate whatever was put on their plate.

There was lots of bad stuff in the fifties.  People of color were treated as less than equal and faced fire hoses, dogs, and cattle prods if they tried to change the system.  Women had few opportunities other than teaching or secretarial work if they chose to not be a housewife.  Gay people did not exist…well not in the open anyway.  Instead of gay people there were spinsters and confirmed bachelors.

“Leave it to Beaver" only showed the fun side of the fifties.  It was all about carefree young boys growing up, getting in trouble and learning life lessons through experiences that today’s children learn in a more structured sterile environment.

Today’s episode was “The Beaver” getting in trouble for driving his home- built “Go Kart” in the street.  Farfetched?  My two older brothers built a similar vehicle when they were fourteen and twelve.  Their Go-Kart consisted of an old lawnmower engine, some boards, and wheels from a wagon.  It was steered with your feet turning the front axle. 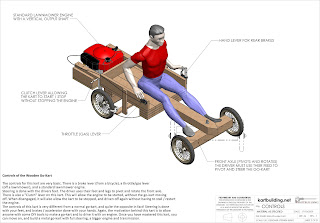 This “Go Kart” traveled at about 20 mph.  My brothers did not drive it on the sneak; they were proudly watched by my dad who did far crazier things in his youth.


When we moved back east from California, we did not bring the go kart.  Instead my brothers bought a small motor scooter called a “Doodlebug.”  No helmet, no license, no problem.   They sold it years later to my cousin. 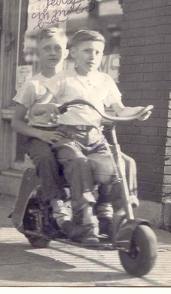 We had lots of vehicles in those days, most were homemade.  A board and some roller-skates made a skateboard.  They did not turn very well, but most of the fun was in the building. 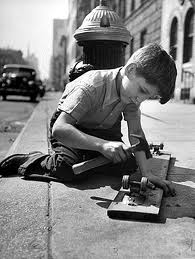 My friends and I once built a “Sail Car.”  It was basically a go kart powered by a sail hung from the mast of an old sail boat.  It worked, but was not very practical on streets which did not want to go in the same direction that the wind would allow the car to travel. 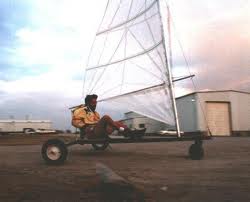 Fort building and tree houses were popular even into the eighties.  My son and his friend Ray built a fort in Ray's back yard from wood scraps and nails they “borrowed” from a construction site. 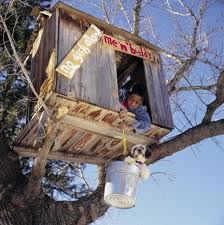 Today, parents do not allow such foolish activities from their boys.  This is probably a good idea, as there were lots of accidents in the past.  Kids crashed their cars, skateboards and sail cars, and were hurt.  Some tree houses were constructed poorly and children fell out.  A little boy around the block from us was killed playing “chicken” with his brother who was on a moped when he leaped in the same direction as his brother turned.


We did unsafe stupid things as boys back in the day, but we kept busy.  We didn’t do drugs or alcohol, we didn’t shoplift (nothing big anyway); we stayed out of trouble…most times.

What is my point you ask?  I have no point.  I merely got wrapped up in an old “Leave it to Beaver” episode and just had to wax nostalgically. 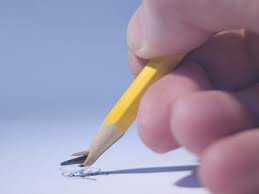