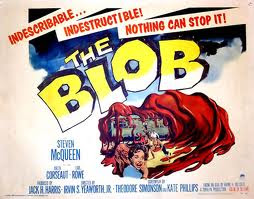 Horror movies have always been a popular genre but they seem be produced in bursts.  From the promos I have seen recently they are making another comeback.  They will make it without me.  I have never liked horror movies.  They have always scared the crap out of me.


In the late fifties most horror movies were based on radiation from the atom bomb causing mutant monsters.  Giant spiders, grasshoppers, fifty-foot women, Godzilla, Mothra all seem pretty lame today, but in the day they were scary.  Maybe it was because the atom bomb was so new and the possible effects of radiation so unknown the imaginations of the fifties ran wild.


I remember one dismal summer day in Ocean City, New Jersey, 1958, I went to a double feature with my cousin Nils.  I was twelve years old; Nils was a couple of years older than I so I think I was just tagging along.  We went to the Surf Theater on the boardwalk.  The “Surf” generally played “B” movies, this day was no different.  The Surf was playing “The Blob” which was about a radioactive mass which grew as it absorbed everything in its path; and the second feature was a Frankenstein movie whose title eludes me.  I do remember being warned that there was a scene in the Frankenstein movie involving a beating heart outside the body that was really, really scary.


When the newsreel and cartoons were over and the first feature came on, Nils elbowed me, “This is going to be good Jody*, you better not chicken out!”


The movie was not on for more than twenty minutes before I started to show signs of in fact being a very big scaredy cat.  The music was scary, the blob was scary, and the on-screen screaming was scary.  My knuckles were white from clutching the arm rest, I was breathing heavy, and there might have been sobbing involved.  At the age of twelve I should not have been so afraid, but I was.


Nils noticed my condition, “Jody, you all right?” He whispered.


“Yeah…bu..but I was just thinking, I might not want to see the Frankenstein beating heart thing.”


And so we left the theater.  We left before the blob had even absorbed its first human being.  We quietly slunk out of the “Surf” onto the boardwalk and walked back home.


“You sure were scared Jody.  Kind of silly spending 80 cents and only watching cartoons and twenty minutes of the first feature.  If you want we can tell people that you felt sick from some bad popcorn.”


“Yeah Nils, I do feel a bit ookey…probably the popcorn.”


To this day I never have seen “The Blob.”  I expect it would seem pretty tame today, but in 1958 it scared the bejesus out of me.   We never told anyone that we left the movie early.  This is the first I have ever told the story.  I’m glad Nils understood and didn’t make fun of his little scaredy cat cousin.


I have often wondered from how easily he agreed to leave, if perhaps my older cousin was also a little scared of “The Blob.”

*At the age of five I rebelled against my name and Jody became Joe.  Nils refused to call me Joe, and was the only person to call me Jody.  To this day he still calls me Jody.  It used to piss me off, now I kinda like it...but only from him!
Posted by joeh at 9:51 AM