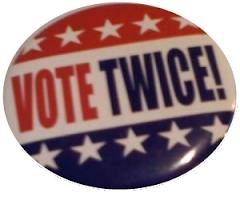 This headline recently caught my eye “Did Obama supporter vote 6 times in 2012? Ohio poll worker target of investigation.”  Voter fraud is way more prevalent than people will admit.  The increased use of absentee ballots and voting by computer are only going to exacerbate the problem.


How easy is voter fraud?


Not too many years ago, every time I went to vote, the names of my ex-wife who lived in the UK and my daughter who lived in North Carolina were listed as registered voters in my N.J. town under my address.  I don’t know how this happened.   Apparently when they moved, their registration stayed.  When I moved to another town, their registrations followed.


Whenever I voted and saw their names I told the officials that these names were not valid.  Every year I was told to report it to the office of Blah, blah-blah.  I avoided this red tape as I knew no one was voting under these invalid registered names, but it always bothered me.


How often are registered names invalid due to voters moving and registering in other states, voters passing away, or voters being made up?  I wonder how much checking is done to verify voter registration validity.  If the poling officials are not honest there could be thousands of fraudulently registered voters in every district.


Voter fraud is serious.  Is fraud equally divided between political parties?  Does one parties cheating cancel out the others?  Probably, but either way fraud undermines the election process.

Fraud exists and it needs to be prosecuted, and yet I have never heard of anyone being fined or going to jail for voter fraud.  Without prosecution fraud will only become more commonplace.


What steps are being done to eliminate fraud?  Nothing.  With powerful computers voter fraud could be made virtually impossible.  Why aren’t voter identification cards issued to every registered voter.  Why can’t registered voters be required to show a driver’s license or a special voter card in lieu of a driver’s license?  Computers could assure duplicate SS numbers are not used to vote more than once even across states.  Why do backward-ass countries like Iraq with ink stained thumbs have more secure voting systems than our country?


Surely this country has the resources to assure a fair voting process. One that makes fraud difficult yet allows access to all our citizens.


I can’t help but believe that most of the arguments for easy registration and lax voting systems, the same arguments that I may well see in comments to this post, are made by people whose real agenda is they believe voter fraud favors their candidates.


If we spent half the money that we use to “get out the vote,” to make the system secure, we could also “get out” the fraudulent votes.

The preceding opinions were those of a Cranky Old Man, and not necessarily those of management (Mrs. Cranky.)