WE NEED TO FIGHT - a Cranky Monday re-run

WE NEED TO FIGHT 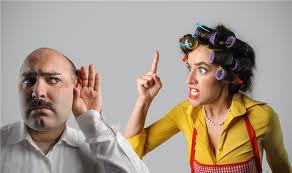 A re-run from February 2012...Things have not changed!


Something is missing in the relationship between my wife and me. We never fight. We hardly even disagree on things. I thought couples were supposed to fight. Every couple I’ve known fights. I always fought in my other marriages. It worries me that we never fight.

So the other day I turned to Mrs. Cranky and said, “We need to fight.”

“We really should have at least one fight.”

“What do you want to fight about?”

“How about doing the dishes? I never help with the dishes.”

“Not really; all I do is rinse and occasionally empty the dishwasher.”

“Sure it is, you help a lot and I appreciate it.”

“No I don’t, you should yell at me over my lack of help.”

“But I don’t want to yell at you, I have no reason to start a fight. You want a fight you yell at me!”

“What should I yell at you about?”

“Yeah, but I don’t know how to start a fight, I’m a counter puncher.”

“Well I don’t know how to start a fight either!”

“Hmmm…that is a problem. I guess we’ll just have to agree to agree.”

“Do you need any help with the dishes?”