SOME PEDESTRIANS ARE JUST PLAIN STUPID 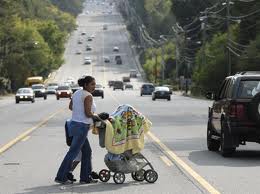 What is up with pedestrians today?  There was a time when people waited for the light to change in their favor before crossing the street.  If someone did cross early they would at least look both ways and then run/jog across the street. 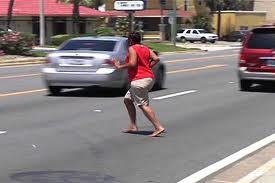 People today cross the street with the light or not…with attitude.  They saunter across and never look at the traffic.  It is as if they are saying to any cars, “Go ahead and hit me…I’ll sue your ass!” 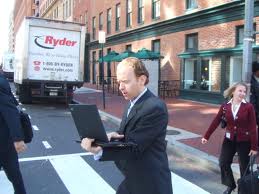 Well yeah, or probably some family member will sue for you because even if you are legally in the right, a 3000 pound hunk of metal traveling at 40 miles an hour will KILL your ass.


The other day I read about a pedestrian being run over and killed when crossing the street with the light, a mind numbed driver on a cell phone ran him over.  This was a tragedy for the young man and also for the driver.  Cell phone ignoramus or not, I feel sorry for this driver almost as much as for the street crosser, in addition to manslaughter charges she will spend the rest of her life with this on her conscience.


Was this accident her fault?  Yes, but on the other hand, how friggin hard is it to cross the street?  You wait for the light, you look both ways and you move as quickly as possible across the street looking for traffic as you cross.  I have stopped crossing a street on several occasions because there was an idiot barreling through the light oblivious to pedestrian traffic.


It pisses me off, I flip the driver the bird, but I survive!


The other day, Mrs. C. and I were driving through our town house complex and there were six kids on their bikes in the middle of the road just talking.  Mrs. C. rolled down the window and called out to these teens.


“Hey guys, you know if I had been on the phone, or messing with the radio or if I was driving drunk I might have just plowed into you cause you’re in the middle of the road and not even looking.”


Back in the day, when traffic was not so busy as today, we used to play in the streets all the time.  We played on our bikes, we played stickball and we played street football.  We also were always on the lookout for traffic.  If we saw a car on the street someone would always yell, “CAR.”  Everyone immediately moved off the street and waved friendly like at the car as it drove past, and then we went back to playing.


We never had an attitude towards the drivers.  We never thought about law suits.  We knew the streets were for cars.  We respected 3000 pounds of moving steel, and no one ever got hurt playing in the street.


Come on pedestrians, it isn’t rocket science; it should not be that hard to safely cross a street.
Posted by joeh at 9:17 AM