RUNNING IS THE MOST DANGEROUS SPORT

RUNNING IS THE MOST DANGEROUS SPORT 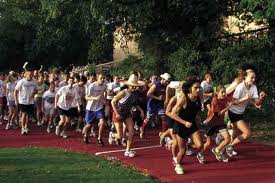 My daughter, a mother of three, recently completed her first marathon race.  Twenty-six miles…she ran twenty-six miles in under five hours.  I am very proud of her accomplishment.  I hope she does not try it again.
Boxing is a dangerous sport.  Football even with all the equipment is a dangerous sport.  Baseball players have been killed when beaned with a ninety mile an hour fast ball.
Running is the most dangerous sport.
Runners have serious problems with their knees and ankles.  The pounding from constant running on pavement is damaging to all joints below the waist.  Runners also get addicted.  They get addicted from the adrenaline and endorphins which running creates.  “The runner’s high” is not just an expression, it is a condition.  Addicted runners run through their joint pain and the problems are exacerbated.
Hunters will tell you that when working dogs, you have to be able to call them off the hunt or they will literally run themselves to death.  When a boxer is hurt, they stop the fight.  When a football player is hurt, they take him out of the game.  If a baseball player tweaks a muscle, he is replaced.
Runners don’t know when to stop.
A distance runner hooked on endorphins will run like the hounds on a hunt.  Drugged by their own running induced chemicals, distance runners lose the ability to take themselves out of the game even when they are completely out of energy.  Heat exhaustion will not stop a runner.  Dehydration will not stop a runner. Even diarrhea will not stop a runner.
I once watched a marathon runner in the Olympics stagger most of the last lap, completely dehydrated, poop running down her leg, finally crawl the last fifty yards to the finish line.  The crowd roared and applauded  her courage.
She almost died.
If it was boxing the crowd would have demanded they stop the fight.
I think recreational running is great exercise.  Jogging two or three miles two or three times a week is a safe and healthy exercise.  Unfortunately many recreational runners get bored with a steady routine.  They force themselves to run farther and faster.  I am willing to bet there are more serious injuries and deaths caused by long distance running than any other sport.
I am proud of my daughter’s accomplishment, but I hope she hangs up the running shoes and takes up something a little safer.
She has a pretty good left hook, maybe she could try boxing.
Posted by joeh at 10:34 AM