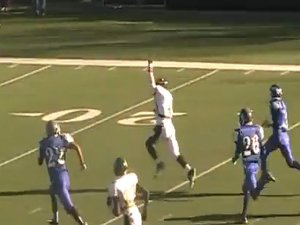 Have you seen the You Tube video of the high school kid who had his possible State Championship winning touchdown called back because of “Excessive Celebration?”
The game was Catholic High vs. Blue Hills for the Massachusetts State Championship.

Ordinarily when there is “Excessive Celebration” the infraction comes after the score.  The penalty is 15 yards to be marked off on the ensuing kickoff.  The penalty is to encourage “Good Sportsmanship.”  In this case the “Excessive Celebration” came before the touchdown.  The play was called back and 15 yards was assessed from the original line of scrimmage.  For raising his fist his team was penalized 7 points and 80 yards and any chance to win the State Championship.


This win was so important to him that he did not care if it was earned or deserved.  His team will never really be considered the champions.  Thirty years from now when a Blue Hills Regional player brags of his team’s State Championship, he will be told. “Oh yes, that was the game that the referee stole from Catholic High School, you never should have won that game.”
This is a quote from the Blue Hills Athletic Director:
Blue Hills Regional Technical School athletic director Ed Catabia told The Boston Globe on Sunday that the referee made "a great call, the right call."

"We try and play by the rules, and the rule is 'no celebrating,' " he said.

What a smoldering pile of stinking shit.

If the Blue Hills coach had any class he would have instructed his team to step aside on the next play and allow Catholic High to score the points they rightfully earned.  They still would have had six minutes left to try and make up a one point deficit and earn the State Championship blemish free.

Regardless of the outcome, if the Blue Hills coach had instructed his team to give up a touchdown, his team would have been celebrated for years as an example of what good sportsmanship truly should be.

If a Blue Hills player so much as clapped his hands after this game it would have been true “Excessive Celebration”.
Posted by joeh at 12:00 PM