This week’s stupid headlines and my stupider sometimes sophomoric comments

U.S. House of Representatives approves cannabis banking bill – Why would someone want to put their pot in a bank?

Creature lurking in tree terrorizing Poland town turns out to be a croissant stuck in a tree – It took three people to remove it, one to hold the croissant, two to chop down the tree.

Trained dogs can smell coronavirus in your pee – So no swab, just pee on a pup?

Short sleep contributes to greater dementia risk, study suggests – Or dementia keeps you awake…one of those…the study isn’t sure.  How helpful is that?

Italian hospital employee accused of skipping work for 15 years, getting paid full salary – Ah yeah, I’ve got a sore throat and a slight fever, so I’m going to have to call in sick for, oh…about 15 years!

Man hurls rabid bobcat after it attacks him and his wife – Wife was fortunate her husband was a former Olympic Bobcat Hurler.

Oklahoma passes a law that can protect drivers who run over protesters – Well that should cut down on protests.

Feel-good Story of the Week

I love this one!

Shaq was out shopping when he saw a man buying an engagement ring – then he bought it for him - This man is special, an extra successful athlete, businessman and personality…he is also a really nice person. 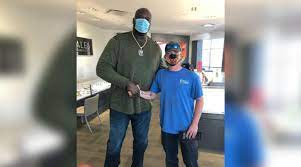 Shaq said the man buying the ring was a "young kid, a hardworking guy"

and the ring was on layaway. "I said, 'You know what, tell your girlfriend I got it.

Take care of her.' And at first, he didn't want to take it,"

Shaq said. He told the man not to worry, he does it all the time.