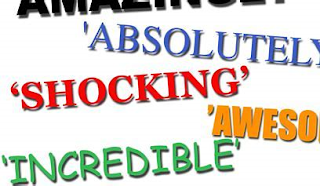 I am super tired so, this post is actually a re-run.
You are not required to read it again, but there will be a quiz.
Communicating these days is difficult.  How do we describe anything adequately today?  Remember when things used to be “very” or “extra?”  If a meal was good you could say that was good, or if it was better than just good it was very good or extra good, if a meal was pretty much the best meal you have ever had in your life you could say it was fabulous!
These days everything is super good.  Very and extra are now meaningless, which makes “super” meaningless, and fabulous is just confusing.  Is fabulous better than super?  Super used to be as high as it gets.  DC comics did not create “Verygoodman,” or “Extragoodman” or “Fabulousman” it created “SUPERman!”
"Super" has been so watered down, I wonder if Clark Kent could still bend steel with his bare hands or leap tall buildings in a single bound…he is Superman, but Hell, everything these days is super.
“I’m SUPER tired.”
“She is SUPER smart.”
“That car is SUPER expensive.”
The word has been diluted.  It is now meaningless.  Sure, you can say something is very SUPER, or extra SUPER, or SUPER fabulous, but it does not work.  Once you throw in that “super” adjective you know that what ever follows could very well only be ordinary.
We used to use “Literally” as a superlative.  “He is literally bigger than a bus!” Now we know that literally means not figuratively, so when used in this way it is clearly just a sarcastic way to say “He is huge!” It used to work!
Today, people use “literally” willy-nilly to indicate a superlative to virtually anything.
“He is literally six feet tall.”   What the HELL?  Why not just say “He is six foot tall?” “Literally” as a sarcastic superlative has been ruined.
We used to say “actually” to confirm that what follows is true even though you might think it is an exaggeration.
“I actually shot par on eight holes last week.” Hard to believe, but yes, I actually did. (Not actually-actually, this is just in way of an example.)
Now people say actually to virtually every question.
“What do you do for a living?”
“Actually, I am a teacher.” As if, what; being a teacher is so difficult to believe?
To me that means, “Hard to believe because I am so clearly uneducated, but Actually, I am a teacher.”
Today, “Actually” actually means nothing.
So many words today have been ruined.  Why is everything “Awesome?”  Is “awesome” better than “super?” Can something be “super awesome?”
Why is every event “Epic?” Epic used to describe an adventure that is heroic or legendry.  How the heck is a night out drinking “heroic” or “legendary?” Thanks to the “How I Married Your Mom” TV show, even “legendry” is ruined.
If something is “Actually” Awesome” or an event is “Literally” “Epic,” how do we communicate that today?
While I am at it, why does the start to an answer to any question today start with “So.”
“Can you tell me where the bus stop is?”
“So, you go two blocks up and turn left one block.”
SO! Why SO?
I’m done, this post is literally too long and I am actually tired of writing. So, I am going to just stop.
I hope you like this post.  I am TERRIFIED that you will not.
Posted by joeh at 1:28 PM