OK, I’m stealing another story.  Seems like I’ve run out of my own.  This one is from fraternity brother Wally, not his real name, but Wally, due to his uncanny resemblance to Wally Cox (GIYP), and his same unassuming dry sense of humor and demeanor. 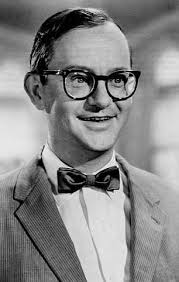 There was a young lady that dated several members of our fraternity house.  She was attractive and nice and she was friendly.  She developed a reputation for being very friendly.  Before your mind starts running, I have no idea how friendly.  In those days friendly did not always mean what it might mean today.  It sometimes just meant not unfriendly.  Anyway, enough of my kerfrumphing around an issue, this young lady was friendly.

So friendly that her nick name around the Frat was ‘Sandy Free-and-Easy.’

Once again this was in the 60’s.  Easy did not necessarily mean what it means today.  Still, she dated more than a few of the brothers and for whatever reason she was known as ‘Sandy Free-and-Easy.’  She ended up marrying one of the brothers, though apparently that did not end well.

And so a classic introduction told only as Wally could tell it.

“I Ran into Ralph and Sandy as I came into the house.  I said,

‘Ralph this is my date Donna and Donna, this is Ralph’s date Sandy Frieneze’.

I took a sharp kick to my shin along with a glare from Ralph. ‘What?’ I asked.

‘But I always heard Frieneze.’  This followed by another kick to the shin.

Sandy then asked, ‘Where did you get the idea my name was Frieneze?’

Between two shin kicks and a glare it struck me that Sandy was not Italian and that perhaps she was in fact free and easy.

‘Oh my gosh, I am so sorry, I confused you with Sally Frieneze who Ralph once dated last year.’

Fortunately, Sandy though a very nice girl may not have been Dean’s list material.

I avoided Ralph and Sandy for the rest of the semester."

Well, that’s my stolen story, a fraternity reunion classic.  You may not think it is that funny; but it is a riot when told by a Mr. Peepers doppelganger.