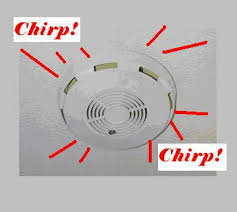 All our devices are hard wired, so once installed we are good to go…right?  Wrong!  Because a fire might actually kill the hard wired connection, all detectors also need a back-up battery.

Because the back-up battery will go bad, the detector warns you when it needs to be changed.  It warns you with a short, loud chirp.  Apparently it has been designed to emit that short loud chirp at 2:17 AM.

So every once and a while I get an elbow to my sound asleep ribs at 2:17 AM.

Before I go any further, I know there those that say just remember to change the batteries every time you change the clocks for Daylight Savings Time (possibly the only reason to even have a Daylight Savings Time).  These are people who don’t mind paying $20 twice a year while the batteries actually last much longer than that.  They are also people who get up early, go to bed early, have organized desks and get their teeth cleaned twice a year.

I will not change the batteries until they chirp.  Above mentioned people will not understand that…just accept it.

Anyway, back to the chirp.

The 2:17AM chirp is always so loud and so short that it is  impossible to tell which battery needs changing.  You have to change them one at a time and wait for the chirp to stop.

Unfortunately, believe it or not, even when unplugged, and with the battery removed, the damn thing will keep chirping at several minute intervals for about ten minutes.

I went through this exercise just last week.  The chirp did not stop and it was still impossible to tell if I got the correct detector.   I put a pillow over the device and when the nextchirp did not emit from the muffled device I decided “F*ck” it I would just change all the devices.

Changing the devices is no easy chore.  If you did it all the time it might be, but when done infrequently…let’s just say it is a pain in the backside.  While ripping down one device (we have an overkill of 6, 2 per floor) I broke a plastic attachment thing and now had to either replace it or hold it up with duct tape.  Mrs. C did not think the duct tape would be a good look. 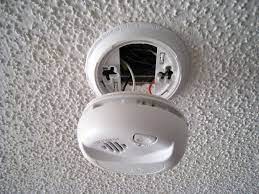 So now at about 3:27 AM I had replaced the batteries in all the devices and the chirping stopped.  I still had to replace the hanging from the ceiling detector the next day (technically the same day).

The new detector came with a battery, but it needed to be taken out and a piece of plastic removed to activate it.  Easy-peasy…at least easy in all the other detectors.

This one required a tiny pin to be removed from the back to allow the battery to come out.  The pin was covered in paper that matched the back of the device.  It was not easy to find and remove the paper to get to the pin which made activating the battery possible.  Once found and removed the pin was still hard to spot and once spotted difficult to grab and pull out.

After at least 25 minutes I (actually we ) finally removed the pin.  Five minutes later, the smoke detector was rewired and installed.  Mrs. C asked,

“Should we put the pin back in.”

“Sure, so then the next time at 2:17 AM the battery needs to be changed I can really lose my mind.”

“Yeah, I guess you are right, though if someone breaks in he could steal the battery because it is not protected by the useless pin.”

“That is just a risk we will have to take.”

Did I mention I hate smoke detectors?