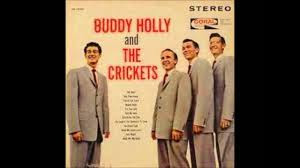 I’ve been on a bit of a Buddy Holly kick lately.  I bought a new electric guitar and Buddy’s early stuff is pretty east to play…and fun.  It got me to thinking about “The Crickets.”  Buddy Holly was billed as Buddy Holly and “The Crickets.”  Several years after Buddy sadly died in a plane crash, I saw “The Crickets” play in Greenwich Village, NY.  I guess they were pretty good, I was young and with a group that was more interested in booze than in “The Crickets.”

OK, I am a follower, not a leader.

Anyway, Buddy Holly has always been a favorite of mine.  I have heard that “The Beatles” were greatly influenced by Buddy Holly.

He had about 15 huge hits in only a few years before he was taken from us.  All his music seemed to evolve.  He was only getting better and better…much like the Beatles.

There is no telling what music we lost with his death, he was an absolute genius, a title often thrown around willy-nilly for entertainers, but not for Buddy.  He was a true genus.

Anyway, while trying to wail away at his early music I have thought about “The Crickets.”  They were musicians, certainly more than I, but they were also just locals that happened to be part of Buddy’s early crowd of friends.  Like a local garage band where one member just happened to be a genius.

It must have been difficult for “The Crickets” to keep up with Buddy.  They were probably happy with a three-chord progression with a bass, rhythm, lead guitar and drum band, while Buddy heard different progressions and a variety of back up instruments.  Buddy wanted to create and  tour the country. “The Crickets” were happy with local bars and hearing a few of their records on the radio.

What is you point Cranky?

I guess I just find it interesting how timing in this world can lead to success.

“The Crickets,” an average bunch of local musicians will forever be tied with and be famous because they were lucky enough to get their start with a musical genius.

Mickey Mantle was a baseball great.  What if he was born 100 years earlier?  He might have ended up a dirt-poor farmer, or lung damaged coal miner.  What if Bill Gates was born in Kansas before computers, or even electricity?  He would probably have been the worst farmer in Kansas and a complete failure.

As the landing gear on my plane of life is getting ready to drop, I wonder…was I born at the wrong time?  Did I just not meet the right people? Has the technology that might unlock my hidden pure genius simply not yet been invented?  Could I have been someone?

I am not that good on guitar, but if I was hanging around Buddy Holly at the right time, I might have been a “Cricket”!