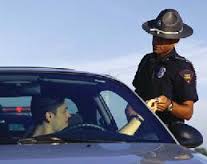 The other night, returning home from a dinner party, we got pulled over by a cop.  It was about 10:00, Mrs. Cranky was driving and we had no idea why the cop pulled us over.  Mrs. C is a good driver, we were on local roads and not speeding, and Mrs. C did not have anything to drink…she almost never does.
We pulled over as far as possible on a narrow road, and were quite frankly a bit of a traffic hazard.  Mrs. C had her license, registration and proof of insurance ready to hand over to the officer as soon as he approached the car.
“The reason I stopped you, is you failed to signal a left turn back there.”
“Oh…OK.”
The officer took the documents and went back to his car.
I didn’t even know what turn he was talking about.
“When did you make a left?”
“Back at the corner by the drug store.”
“Oh…Wait, back at the stop light in a left turn only lane, and the light has a left turn arrow before any other traffic can move.”
“Yup.”
“Why do you need to signal?  It would be illegal to not turn! Plus that light was over a quarter of a mile back.”
“I don’t know, he was following us for a while, but I’m not going to argue.”
The officer returned and handed Mrs. C a warning.
“I’m just going to issue you a warning, be more careful in the future.”
That was it, no biggie.  I suspect the officer was really just making random stops for minor infractions to see if anyone was driving impaired or without a license, insurance or registration.
But the stop did make me think, “What if we were black?”  I’m pretty sure we would assume the stop was race related.  If it were not the first time, one of us may have taken an attitude.  At that point, a simple stop could escalate into a scene where the officer got nasty and perhaps we took even more of an attitude.  Bing bang boom, simple stop becomes a major incident.
The police often make nuisance stops.  I believe they probably make profile stops on blacks disproportionate to stops on white people.  The profiling might be on cars.  Perhaps blacks tend to drive cars that police associate with crime.  We drive a big dark SUV, perhaps a preferred getaway car…or not.
Point is, on Saturday we were stopped for a silly violation and were just given a warning.  Being white we had no reason to suspect we were being unfairly targeted, if we were black I’m pretty sure we would have thought differently.  It is a problem.  It is a real problem of racial profiling; it is also a problem of perception.
I do wonder if we would have been given a ticket and not a warning if we were not white.  I can hear my African-American readers very clearly, “Oh Hell yeah!” I think they might be right.
This is an issue that perhaps is not worth disrespecting the flag, but it does need to be talked about and remedied.

BTW: The New Jersey traffic regulations say, “No person shall so turn any vehicle without giving an appropriate signal in the manner hereinafter provided in the event any other traffic may be affected by such movement.”
As there was only one car at the intersection and we were in a left turn only lane and turned when the traffic arrow allowed, I do not see how our turn affected any other traffic.  The only other car was across from us and still had a red signal when we got the green arrow to turn.
I Think if we were given a summons, we would have disputed it and we would have won.

P.S. To the asshole that rolled down his window and laughed at us while we were stopped, “FUCK YOU, we just got a warning…DICKWAD!!”
Posted by joeh at 10:00 PM