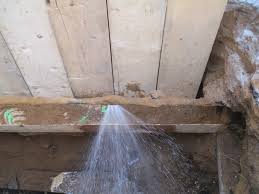 Monday was day one of our guest bathroom renovation.  Monday was demolition day.  Everything went smoothly until around 1:00 when the contractor had to shut off the water.
The shut-off valve did not close completely.
I was in the basement when they were shutting down the water.  There seemed to be a problem.  The boss came down and started clinking on the valve; it did not seem to be working.  I left the room as I really don’t like to hang around people working.  People generally do better work when the owner is not watching like a hawk.
Around 1:30 Mrs. C called me to come down stairs.  There was a problem and I might want to make sure nothing was wrong.  I went down to our finished basement to find the valve blown off the water main pipe and water was gushing uncontrollably and running over the slow draining slop sink.  Three workers were running a bucket brigade from the pipe to the sump pump on the other side of the basement.  There was an inch of water on the floor slowly creeping into the finished part of the basement.  I first saved my guitars…there was little else of value in danger.
The boss was shopping for a shut-off thingy to stop the problem but was having little luck.  They claimed everything was under control.  Mrs. C disagreed and called the town water company to turn off the water from the street.
Twenty minutes later the water guy came and shut off the water.  An hour later the boss showed up with the necessary parts to replace the broken valve.   Three workers were soaked and were near exhaustion from the bucket brigade process.
To give credit where credit is due, the workers did a terrific job of minimizing the damage, and the broken valve may not have been their fault (but it probably was.)  We may need to replace a carpet which should be covered by the insurance I have paid for 40+ years and never made a claim.  All is well, but there was some real excitement at the Cranky house for a while.
We were a little fortunate in that the sump pump operated for over an hour and did not burn out, and the floor was pitched correctly so the French drain was efficient.
After all was repaired and the water dude came back to turn on the water, Rick the supervisor said to the water dude,
“I’m just glad that the shut off from the street worked.”
“Wait a minute, you mean sometimes the street shut off doesn’t work?”
The water dude answered, “Oh yeah, these old hook ups snap all the time.”
“Crap, what happens when they snap?”
“Then you’re really fucked!”
This was information I’m glad I didn’t know at the time.
I guess we were pretty lucky after all.
Posted by joeh at 8:13 PM