IT AIN’T OVER TIL IT’S OVER

IT AIN’T OVER TIL IT’S OVER 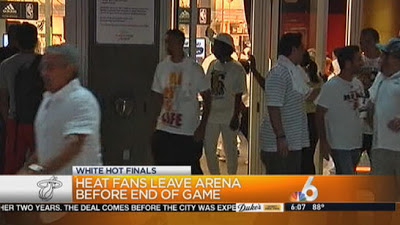 
The following opinion is that of a cranky old man, opposing opinions are welcome (wrong, but welcome) but please, no name calling, that means you, you big stupid-head.

So the Miami Heat snatched victory from the jaws of defeat in game six of the NBA championship series.  I missed it.  I am not a big fan of the NBA.  If the Knicks were playing I would watch, but otherwise not so much.  I will probably watch game seven tonight (Thursday.)  Maybe I’ll wait for the fourth quarter when the game usually gets interesting.


And that is why I am commenting on a game I did not even watch.  Basketball fans should know the game is not over until the buzzer buzzes.  Many Miami Heat fans left this game with Miami down by five points and 28 seconds remaining.  They left to get to their cars and beat the traffic, then when the game was tied up and going to overtime they went nuts trying to get back into the arena.  Security would not let them back in.  HA!


I never understand fans paying big dollars to attend an event, ticket prices for this game must have started at $50 or more, and then leaving before the game is over.  Even if the outcome is clear, I would not leave early.  I watched “Lincoln” until the end even though I knew he would be shot.  Anything can happen in a sporting event.  Stay to the end or let a real fan get a ticket!


The greatest games ever, in any sport, all go to the final play.  There is nothing as exciting as a big comeback.  Guess what there has never been a big comeback that did not look like a lost cause…THAT’S WHY THEY’RE BIG COMEBACKS!!


Why do people leave baseball games in the seventh inning?  How can you file out of a football game in the fourth quarter?


In the name of Magic Johnson, can anyone leave a championship basketball game with only 28 seconds left???  Twenty-eight seconds!!! Your team did not quit, why did you quit on your team?  Are you going to beat the traffic in 28 seconds?  If you are that worried about traffic, STAY THE FRIG HOME.  Watch it on TV.   You are not a fan, you are a poser.  You go to the game to say you were at the game.  Your life revolves around beating traffic?  You are not a fan.  A fan watches to the bitter end…just in case.  Traffic?  Take your time, hang out, and stop for a drink, that 28 seconds will not get you home that much sooner, and if getting home is so important, STAY AT HOME in the first place.


You are not a fan you people who exit early; you are as Mrs. Cranky so often calls me:


The preceding has been the opinion of a Cranky Old Man and not necessarily that of management…Mrs. Cranky!

Update - The heat won the Championship Thursday night.  With 22 seconds left, Miami was up by 5 points.  No fans left the stadium.
Posted by joeh at 9:29 AM