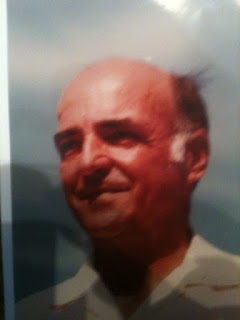 “Dear Old Dad” is what we sometimes called my Pop.  It came from some old Hanna-Barbera cartoon, “Augie Doggie.”  That is ironic as my dad was not a cartoon kinda of guy.  It is not as if my dad was all serious and without a sense of humor, he actually did have a playful side, but he was just too smart for cartoon nonsense.


I often post about my mom,  not because dad was not interesting, it is just that mom had a Lucille Ball quality that makes her better post material.


My dad could do anything, he knew almost everything.  If he didn’t know something that interested him, he would buy a book and become an expert.  Dad was uber-smart.  He was so smart we would never ask for his help with homework because he saw everything, particularly math, through “genius eyes.”  He would explain things in a way that another genius would immediately understand, but an ordinary high school sophomore would be totally lost.


“Gee dad, that’s not how the teacher explained it.”


“The teacher is wrong!”


I am sure the teacher was wrong, but she had to teach in a way that ordinary humans would understand.   Anyway, you didn’t ask dad for help in math.


Dad was a Chemical Engineer by trade.  He chose that profession in a typical dad way.


When he was interviewing for admittance to college, Penn State, the Dean told him,


“Son we have to admit you because you graduated from high school and you are a Pennsylvania resident, but you will never graduate from this institution!”


Dad’s high school grades were not top notch as he had been ill for several years, and also, to him the courses were not challenging.


My father responded to the Dean with a question,


“Sir, what is the most difficult degree to earn at Penn State?”


“Chemical engineer is clearly our most challenging field of study.”


“And that,” my dad would recall, “is why I became a Chemical Engineer!”


My Dad did not go to war in 1940; he was instead part of a Government project where the countries best minds worked on top secret projects which would help end the war.  He never told us exactly what he did but I know it involved being very smart.


For a few years Dad built boats as a hobby.  He designed and built fiberglass sailboats for his children to race.  They were the first unsinkable small craft ever built.  He built them years ahead of the famed “Boston Whaler.”


My father once commercially grew vegetables in a greenhouse through a process known as hydroponics.  This process is common today.  Plants are grown large and fast year round in a slurry of water and chemicals, no soil. It was a mostly a theoretical process when my dad did it.  He did this as a hobby, a profitable hobby, but it was a hobby.


Dad made his own light “dimmer” switches years before you could buy them at the hardware store.


I have memories of my dad free diving for abalone and rock lobster when we lived in Southern California.  Dad was a top notch golfer until his back stiffened up a bit.  He taught me how to bowl when I was only seven.  When I played football in high school he filmed every game, using two 8mm cameras so he wouldn’t miss a play.  Dad was frugal, but we never went without, and he would help anyone who was in need.  He was a sucker for panhandlers.  He once told me when I asked him if a beggar he helped was really in need that, he figured it was a scam, but “Just in case.”


“Dear old Dad” could fix anything, from a broken motor to a broken heart.  He knew when to lecture, and when to back off.  I used to think he knew everything and could do anything.


I’m not so sure that I was wrong.

This Sunday's Stupid Headlines will be published Monday.
Posted by joeh at 7:54 AM