HEAVEN or HELL - another Cranky re-run 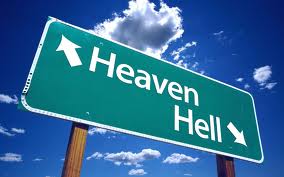 As I get older and I realize my time above ground is limited, I reflect on my life and wonder….am I going to Heaven or Hell?


The problem is I don’t really know what the rules are.  Sure the major religions all claim they know the rules, but do they? And, does God take sides?  Surely if I lead a good life I won’t be sent to Hell just because I did not face Mecca and say “Ooga booga” six times a day, or just because I ate pork.


Who goes to Hell?  I gotta think Hitler went to Hell.  Who goes to Heaven?  Surely Mother Theresa is in Heaven.  What about those in between?  What are the rules?


I guess if the rules were hard and fast, those who go over the line would know there was no turning back and just keep on sinning.


I think God wants us to have the chance for a do-over.  Catholics believe in the do-over in the form of “confession.”  Is that really fair?  Could Hitler have merely gone to confession and got a pass?


“Bless me Father for I have sinned.”


“Yes Father and thank you.”


I know I have not led a perfect life, but I am no Hitler, I think I should not go to Hell.  Then again I am no Mother Theresa, should I go to Heaven?  There must be some compromise.  The gap is too large, the consequences too dire for this to be a pass/fail system.


“Hmmm Joe you look pretty good…wait….I see you egg bombed Mrs. Krances House when you were ten….I’m sorry, you are going down.”


“Yes, sorry, it was a close call.  Say hello to Saddam and George Carlin.”


“George Carlin? But he was so funny?”


“Yes, but it was that seven words thing.  It was another close call.”


There must be an in-between.  Mother Theresa deserves steak and lobster, Hitler deserves dog shit.  I think I should at least get “The Olive Garden” and pasta with Asiago cheese.


I think maybe the in-betweeners have to do some time in Hell and then go to Heaven, but not first class Heaven.  Maybe I could do two weeks in “Toys are Us” on Christmas Eve and then make tourist class Heaven.


Whatever the requirements, a “C” average or above, pass/fail, or a quota system, it is probably too late for me to make any major changes.  I plan to try not to be mean, not kill anyone and hope I can plead a case with the life I’ve led so far.


And I thought final exams in college were important.


I will be off for four days on vacation at Disney World.  Mrs. Cranky and our friend love all things Mickey...me not so much.  I will be spending lots of time at the pool with my Nook.
Posted by joeh at 8:57 AM