FRANK A. AND THE MOB

FRANK A. AND THE MOB 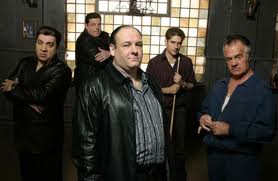 It seems that everyone loves a good mob story.  Some of the most popular movies of all time are mob movies.  “The Godfather,” “Goodfellows,” and “A Bronx Tale” are classics.  “The Sopranos” series put HBO on the TV map.  There is something about the power of evil along with the occasional ability to exact “Mob Justice” that is intoxicating.


One of the most interesting men I have ever known had “Mob” connections.  Frank A. was a clerk in a Wall Street Operations unit I supervised years ago.  His connection to organized crime was through his father whose barbershop was apparently once a popular mob hangout (there is a story of a famous mob rub-out which may have taken place in one of the shops chairs.)


Frank might just be the nicest man I have ever known.   He may not, however, have been the brightest bulb in the lamp.  Because of this he was sometimes taken advantage of by some people with questionable backgrounds.


Frank never did anything criminal, but he was a member of a Masonic Temple-like club and was often called upon to perform minor favors for other members who might have had criminal dealings.  That is as much information as I could ever glean from him.


Frank was returning to work from lunch in downtown NYC.  As he crossed the street he somehow found himself in the middle of a drug bust.  Half the way across the street, a plain clothes cop pulled a gun and pointed it at a suspected drug dealer behind Frank.  “Hold it right there,” the cop yelled. Frank stopped in his tracks and raised his hands.  “Not you, you idiot,” the cop screamed, “Get the hell out of the way!”


Frank told me he thought he was being stopped for crossing against the “don’t walk” sign.


Frank had twin sons who were also a bit on the slow side.  One son was being relentlessly bullied by another kid in school.  At some point, his son had enough and popped the bully in the nose.


That night Frank got a call from the bully’s father.  The man claimed to be a friend of “Joey the Hook” a well-known gangster, and he made a veiled threat to Frank that his house just might “accidentally” catch on fire.


Frank was very upset and scared at this threat, so he called one of his friends from the club.  He called “Joey the Hook.”  Mr. Hook apparently did not take too kindly to having his name thrown wantonly about.
Joey picked up Frank and along with two other friends whom Frank described as “refrigerators with arms and legs” called upon the man who had threatened Frank. 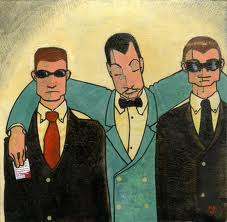 “Say hello to my little friends!”


“Naw, we won’t hurt him none, we just want to provide some disincentive for him to use my name.”


Frank rang his tormentor’s doorbell with the three gentlemen by his side.  The man who claimed to know “Joey the Hook” opened the door and was greeted by Joey himself.


“I understand youse suggested to my good friend Mr. A here that I “Joey the Hook,” was a friend of yours and further that as your friend I might be inclined to cause harm to Mr. A here.  I want to assure you that that is very unlikely.  Mr. A is an old friend to whom I owe several favors.  One favor if he so indicated it would amuse him, might be to cause distress to your person.  Do I make myself clear on this issue of causing harm to one’s friends?”


Frank told me that you could actually see the blood drain from the man’s head as he stammered his assurances to Joey that it was all just a joke and he meant no harm.


“Yeah, sure, a joke…” and everyone laughed except the man at the door, and Frank who was still afraid that his friends might hurt his kid’s bully’s father.


Organized crime and its members can be very scary, but when they use their muscle against a bully to protect an innocent, nice man like Frank, it is easy to see how they are sometimes characterized as “the good guys.”

Oh, and Frank's kids were never bullied at school again.