I Know What You Did!

I Know What You Did! 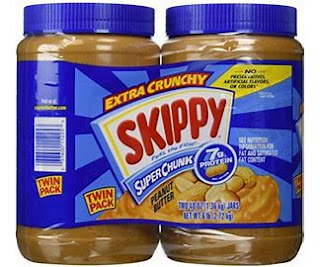 I eat a lot of peanut butter…chunky style.  We buy multiple large jars at Costco.  The jars are almost bigger than the knife I use to extract the peanut butter.  When the jar starts to get empty, I hate scrapping it clean.  The knife gets messy, it takes a lot of time, and I don’t get enough on the knife in one dip to spread the peanut butter the way I like.


Surprisingly enough, this starts a problem in the cranky house.


When the jar gets low, I will just throw it away.


“Don’t throw that jar away, I can scrape it out and put what’s left in the new jar!”


“You don’t eat peanut butter; how do you know?”


“We have two more jars of virgin peanut butter, just let me enjoy them and leave the scrapping’s alone.”


“You’re talking about maybe 30 cents of waste, give me a break.  Let that be my luxury, un-scrapped peanut butter!”


“What? Waste!  How about your storage unit that we pay every month to store CRAP!”


“Don’t start on me with the storage unit, some of that crap might be good crap!”


Anyway, this happens every time the current jar gets near empty.


Tonight, the jar was almost done.  Without saying anything, I filled it with water and got a new jar out of the pantry.  Mrs. C who was at the kitchen table said nothing.


I enjoyed my peanut butter on bread with my end-of-dinner coffee when Mrs. C looked at me and said,


“You filled the peanut butter jar with water so I can’t scrape out the remains stuck to the jar.”