When is the last time you’ve seen a clothesline?  Not the illegal tackle with an arm to the runner’s throat clothesline, an actual line to dry clothes.


OK, those at the shore don’t count.  They are in every seashore back yard, but you only see towels and bathing suits on them.  I mean regular home back-yard clotheslines with towels, shirts, pants, socks et al hanging out to dry.


When we used to drive by apartment complexes in the city, there would be a line out every window.  The line would be on a wheel so clothes could be hung and moved to hang the next article of clothes, or bring in the dry laundry.


In our backyard, and the yards of most suburban homes was an umbrella type clothes line.  You could load it up and spin it around instead of the pull it in wheel type. 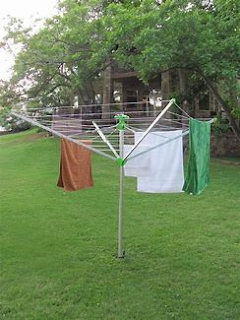 We had a dryer in our house, but mom insisted nothing smelled better than clothes that were left out to dry in the sun.  At some point I think mom decided good smelling clothes was not worth the effort, so the clothesline was only relegated for towels.


She was right, towels do not smell as good out of a dryer as from off a clothesline.


I wonder, did people talk about what they saw on other peoples clothesline?  Did they make fun of Mrs. O’Leary’s huge bloomers?  Did they just gossip in general while hanging and unhanging an almost daily laundry ritual?


I’ll bet you can still buy a clothes line rig, but I’ve not seen them in forever.   I know I have some rope that is still labeled as “clothesline” but it is for general use, not clothes.
Remember clothespins?  I liked the spring ones, they held BB cards in bike spokes the best.

It was a different world when there were clotheslines.  A daily ritual performed by every household.  A yard meeting place where gossip, recipes, and news were exchanged while performing the mundane chore.


It was a time when people actually “Laughed out loud”, exclaimed “Oh My God”, and would “See you later,” instead of lol, OMG and C U Ltr!


Bye Bye clotheslines, when we gain something, we always seem to lose something as well.