THINGS THAT GO BUMP IN THE NIGHT

THINGS THAT GO BUMP IN THE NIGHT 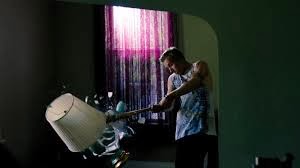 Our townhouse is not large, but it is a good size for Mrs. Cranky, myself and an occasional visitor.  It is an end unit and we have a plenty of privacy outside.  Inside, however, it is sometimes a bit creepy.  We border on two other units, and sometimes when our neighbors come home, or just slam a door it sounds like they are inside our unit.  That combined with the fact that Mrs. C came home a few years ago, and saw a window had been jimmied open by intruders sometimes keeps us on edge.  She never saw the intruders, she rang the bell, called the police, and heard the burglars leave out the back door in a hurry.


Nothing was stolen except for our sense of security.
We now have active burglar alarms, and there are only two ways to enter the home, the front door and a sliding glass patio door.  We always keep the front door locked and the patio door is locked plus a wood brace makes it impossible to enter from the outside.  Still, the occasional downstairs noises can creep you out even when you are positive the doors are all secure.
One night it sure sounded like our front door was opened, and there were footsteps in the downstairs hallway.  Mrs. C was concerned.
“Did you lock the front door?”
“It’s fine; it’s just noise from next door.”
“OK, but it is sure creepy.”
“I agree, but it is nothing…go to sleep.”
Just then there was a tremendous crash from downstairs.  It wasn’t next door.  It wasn’t a creepy floor squeak or house shifting noise, it was a crash, then a second crash, then silence.
“What the hell was that?”
I grabbed an old police Billy club a friend gave me years ago and got out of bed.
“CALL 911, I’M GOING TO CHECK IT OUT.”
“I’M DIALING RIGHT NOW!!”
“WHO EVER IS DOWN THERE, GET THE FUCK OUT NOW.  I’VE GOT A PISTOL.  I’M COMING DOWN IN TWO MINUTES. GET THE FUCK OUT NOW!”
“What are you going to do?”
“Shhh, do you hear anything?”
“No.”
“I’m going downstairs.”
“Be careful.”
I crept down the stairs, club in hand, heart pounding.  I heard nothing, there was no movement, no shadows, and nothing was moved.  I turned down the hallway, TV police style.  I slashed blindly with my club as I turned into the hallway; nothing.  I checked the bathroom; nothing.  Every room was clear.  Then there was the pantry.  It is large enough for a person to hide in.  I slid silently up to the pantry door, and ripped it open with my club raised.
Cans fell out at me, cereal boxes were all over, the pantry was a mess.
Two weeks before I had installed new shelves in the pantry.  Mrs. C told me the molly bolts I used were not big enough.  I had told her she was crazy.  For two weeks I was right.  Tonight I was wrong, very, very wrong.  The bolts had pulled out under the weight of one too many soup cans and had crashed heavily onto the shelf below which then succumbed to the extra weight of the fallen shelf and pulled loose on its own…hence the second crash.
The shelf failure was my fault.  The mess was my fault.  The ungodly scare was my fault.  I felt like an idiot skulking around my downstairs calling out to a non- existent burglar and swinging wildly with my club.
Mrs. Cranky thought I was very brave.
Then referring to the molly bolts she said, “I told you so!”
re-run from November 2013
Posted by joeh at 5:59 PM