The Problem With The Middle East

The Problem With The Middle East 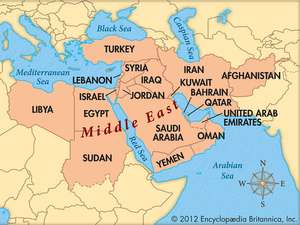 OK, not THE problem; MY problem.


It is difficult enough to know what is going on in that area of the world, but the media can not even agree on how to pronounce names and countries.


Is it just me, or does anyone else flip out when after years of hearing Hezbollah pronounced Hez boll ah’ suddenly it is pronounced Hez bol’ ah.  Why are suddenly some in the media changing the accent in the name?  Just stop it or at least agree on one way to say the damn name!

Just determine the correct way and then stick with it!!


Are there two countries with similar names, Cutter and Cu tar’ or is it just that one spelled Qatar? If it is one country, please, everyone get together and call it by just one name.

RT- I can't find it in me to trust a country that does not follow a "Q" with a "U" in their name!


It seems that the terrorist group ISIS has been decimated and forced underground.  That is good news, but what about those other terrorist groups, Dash and ISIL? Actually, I haven’t heard about ISIL since Obama left office…What was up with that?


I think it was in the 70’s that Iran was run by the supreme leader The Eyeahtola Komenai.  That was over 40 years ago, how old is that dude anyway?  And it seems that he hasn’t changed one bit…still looks the same.  Has there been more than one supreme leader as I hear it as Ko’menai, Kom e’ nai and also Komen’a i.  Must be three new guys since 1970 who just all look alike.  If it is only one, pick a pronunciation and stick to it…please.


Are people from Saudi Arabia called Sowdies or Sawdies.  Pick one and stick to it…please


I do know that most of those countries hate Is-ra’-el and they also hate Is’-rye-el, and Iz'-ray-el.  Maybe Is-ra'-el, Is-rye’-el and Is’-ray-el should join together and form one country.  Anything to make this world less confusing.


I don't know if the problems in the Middle East can ever be resolved, but a good start would be to at least agree on the pronunciation of the key players.
Posted by joeh at 6:13 PM