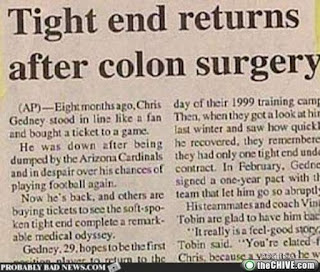 STUPID HEADLINE SUNDAY
This week’s stupid headlines and my stupider, sometimes sophomoric comments.
________________________
Respectable English Towns Being Plagued By Pop-Up Brothels – This isn’t new, Pop-Tarts have been around for years.
Alien hunter says he found a fossilized grizzly bear on Mars – Or it might be a speck of dust on the camera lens…probably a fossilized grizzly bear.
Woman gets stuck in bathtub after using too much coconut oil – She tried to get out to the tune of “Slip sliding away.”
Texas Rangers join search for Tom Brady's missing jersey – He was just airing it out and it disappeared.
Tattoo-covered sex offender sought by US Marshals – Be on the look
out for man 5’6” 140 lbs., light complexion and really scary looking! 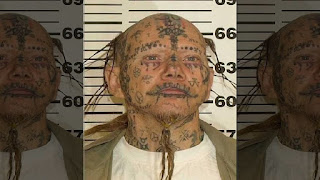 Male brains linked to higher autism risk in women – Wha wha wha what?
Florida man caught trying to steal $7 billion, blames Jesus – Man claimed he would have others take $7 billion from him so he was just doing unto others.

Paris to build 8-foot-high bulletproof glass wall around Eiffel Tower – Mexico reflexively announced that they refuse to pay for it.
FLORIDA* GOLFER FIGHTS OFF ALLIGATOR WITH PUTTER – This was a very bold move. His caddy recommended a three iron.


Man Plans to Fly 80 Rhinos to Australia to Protect them From Poachers–and Extinction - This has been a bad idea in the past, I just hope Australia doesn’t have a Rhinoceros plague.

*I don’t look for Florida stories, they just keep coming!


AND THE FEEL-GOOD STORY FOR THE WEEK:

Mailman builds ramp for aging dog so they can continue their sweet daily greeting – OK, I’m a sucker for dog stories.

COME BACK NEXT WEEK FOR MORE