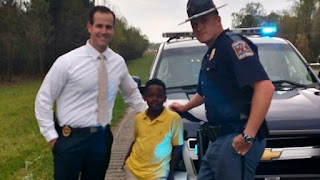 Hero
Kid was a hero…In New Jersey they’d fine him for not having a driver’s license.
City birds are smarter than rural birds – Maybe book learning, but rural birds have more common sense.
Florida Man steals BMW he tried to buy with food stamps – I hear the BMW is a sweet ride, but I’m pretty sure that does not qualify as food.
First-time flier mistakes emergency exit for bathroom – First and I assume last-time flier.
Oops! Rhode Island tourism video features Reykjavik, Iceland – Is there really that much difference in the winter?
Flying saucer found smashed to bits in Roswell, suspect in custody – Police described the suspect as a small man with a big head and tiny ears.  He appeared to be high on pioeouieemium at the time.
First graders suspended after plotting to kill classmate – Wow, suspension!  They are getting tough these days.  When I was in school plotting to kill a classmate was good for only one, maybe two hours of detention.
New Jersey's ban on headstone sales takes effect – Fortunately I bought mine on Black Friday at half price.
Brewers pitcher suffers serious injury taking off his shoe – I once threw my back out putting on my pants.  This is why I now always stretch before I dress or undress.
Angry customer unleashes 13-foot snake in restaurant – The article does not say if he took the leash off, or if the snake just slithered out of his collar.
China is Now The World's Largest Beer Market – Actually that should be largest BEEL market.
Mom charged after making kids walk more than 3 miles to school in the cold – Oh big deal, I did this every day, into the wind and uphill…both ways!

Come back next week for more:
STUPID HEADLINE SUNDAY!!
Posted by joeh at 11:27 PM