LET’s HEAR IT FOR THE MUSLIMS

LET’s HEAR IT FOR THE MUSLIMS 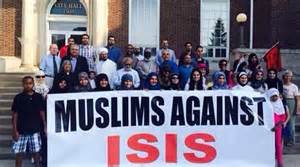 
The following is the opinion of a cranky old man with little knowledge of the subject opined.  Opposing views are welcome but will be ignored.  As always, please no name calling, that means you, you big stupid-head!


There is a common criticism toward Muslims with respect to the terrorist acts that Al Qaeda, ISIS and other groups commit using the Muslim religion to legitimatize their despicable acts.  The criticism is the loud silence from the Muslim community.


Although there have been some Muslim leaders who disavow terrorist acts and condemn them, overwhelmingly there has been silence.  The silence is understandable given the brutality of the terrorists. I suspect there has been a very reasonable fear in the Muslim community of horrible retribution to anyone that speaks against the terrorists.


These Islamic terrorists use fear and intimidation to force their perverted ideology on the world.  Fear and intimidation is very effective until what people are feeling and experiencing is as frightening as what they fear.  At that point even the timid fight back.


I believe we are seeing the start of that fight back.  Voices are being raised; the #Notinmyname Facebook and Twitter campaign is gathering steam.  As the number of voices being raised against Islamic terrorists increases exponentially, terrorist intimidation will decrease, terrorist recruitment and indoctrinating will diminish, and we will see defections in the terrorist camps.


It will be slow in the beginning, but if true Muslims continue to stand up for their faith, the terrorists will be defeated.  In fact it is the only way this perversion will truly be eradicated.  Bombs and bullets can snuff out infernos, but it will take the voices of true Muslims to stamp out all the embers.


The preceding was the opinion of a cranky old man and not necessarily that of management…Mrs. Cranky.