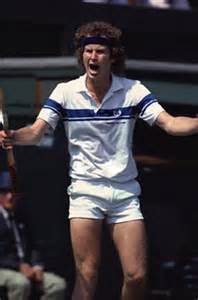 Years ago I used to watch tennis.  In the eighties it was all the rage.  It was difficult to find time on the public courts in our town.  Today the courts are mostly used for skateboards.  When tennis was really popular, the big names in men's were Jimmy Connors, John McEnroe, Bjorn Borg and Ivan Lendl.


I get it, a call for or against you in tennis can cost you a match.  Emotions run high especially in a big tournament, but McEnroe was the worst.  He argued almost every close call that did not go his way.  In the eighties human discretion was the only way to call a match, today they may use sophisticated technology to make the close calls; I don’t know and I don’t care anymore, I couldn’t name more than three pros today and have no idea who won the last major tournaments.


I have to admit, one of the reasons I found tennis popular in the eighties was that McEnroe and Connors made a stuffy old snobby rich man’s game more human with their shenanigans.  Still, John McEnroe was over the top.  He complained about the calls.  He berated the linesmen and head official.  He pouted and threatened to stop play.  He was full of himself.  He was a big baby, a whiny ass bitch in a snotty ass sport.


McEnroe was famous for his tennis skills (He was one of the best ever) and his whining tantrums:


“Are you kidding me?”  “You cannot be serious!”  “What are you even looking at?” “Unbelievable!”


Oh, I watched.  I watch train wrecks, but I still hated the little shit!


What happened to John McEnroe?  After he retired he had a failed music career, made a few movie cameos, had a failed try as a game show host and is a TV tennis commentator.  I imagine he is still quite wealthy, but his newest gig gives me great pleasure.


The great John McEnroe, the spoiled tennis bitch, is selling a foot fungus product.  In the commercial, he capitalizes on his old complaining persona.  He announces a tennis match between “Toe Fungus” and his “Toe Fungus Product.”


Way to go John, you’ve come a long way from the best tennis player in the world and a whiny brat, to a huckster using your old brat persona to hawk about “Toe Fungus!”