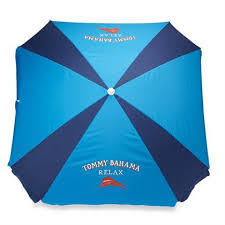 This cranky old man has been down at the Jersey Shore for two weeks.  Why you may ask are you cranky when you have been at the beach for two weeks?


I have a thing about beach umbrellas.  Beach umbrellas can catch the wind, yank out of the sand, flip over and fly pointy end first into casual beach people.  I don’t like when that happens.  I especially don’t want that to happen with my umbrella on my watch.


We bought some new umbrellas last year, “Tommy Bahama” umbrellas.  They have a base that screws into the sand to prevent it from doing what I described in the previous paragraph.


I hate those umbrellas.  They have a design flaw.  The umbrella ribs are separated in such a way that the wind catches the umbrella and turns it into a mini-sail.  This causes the umbrella to rock back and forth and though it does not rip out of the sand and fly away, it does not remain stable and it drives me crazy worrying about it.


Yesterday it was particularly windy and sunny, and Mrs. Cranky wanted the umbrella open to protect her from the sun.  Being a wonderful husband I set up the umbrella for her.  Being a rotten impatient jerk, I got tired of readjusting the defective umbrella, cursed several times, and ripped the umbrella out of the sand.  I might have said something like, “Put on sun screen, this umbrella is a pain in the ass and I’m done with it.” Maybe, I’m not real clear on that point.

﻿﻿﻿
I believe that proper brother-in-law code would have required Mike, my brother-in-law, to nod his head in agreement and say, “Oh yeah, definitely a design flaw…I would buy a new umbrella.”


Instead he insisted on using a fancy umbrella anchor he had and demonstrating how the improved anchor would solve the stability issue.


I adamantly let him know,


“It is not the anchor; it is an umbrella design flaw!”


“Let me just try this anchor.”


Mrs. Cranky ganged up on me.

Mrs. Cranky's uncle Louie from Canada, ganged up on me.


Mike, Mrs. Cranky’s cousin, ganged up on me.


Mike, my brother-in-law’s son, ganged up on me.


Even Mike, my brother-in-law’s son’s five year old son, ganged up on me.


Out Miked, I let Mike, my brother-in-law, try.


Even with the larger anchor base flange, the design defective umbrella caught too much wind and tried to wriggle loose, but the stronger improved umbrella anchor held firm and the umbrella was stabilized.


I still say my brother-in-law broke an unwritten code by challenging me in front of Mrs. Cranky .


I also stand by my claim that the umbrella has a severe design flaw.


My brother-in-law did give me an expensive cigar, so we’re good.