My recent post on the usurping of the traditional three fingered “OK” sign to no longer mean “That’s Good!” to now be a symbol of being a racist and proud of it, got me thinking,

“How does a simple nice gesture hundreds of years old with a specific and universal meaning somehow suddenly become an evil symbol celebrating White Power?”

Turns out some satirical group made up the whole thing, claiming the three fingers stood for the “W” and the circle formed with the forefinger against the middle finger became a “P” hence WP or White Power.

(Actually the "P" is not really a "P" unless the sign is upside down, but then the "W" becomes an "M"...no one ever said that White Supremist were very smart. )

This satirical group made this up as a joke turning the OK sign used by 98% of the world from time to time, into a racist signal.  Actual racists grabbed on to the joke and began using the sign, usually held upside-down as sort of a secret racist-brother signal.

So now we can’t use this symbol without people saying “You must be a racist!!”

It also got me to thinking:

“Well if some group can just casually change the meaning of a symbol from friendly to evil, then maybe I could change mean-spirited signals to stand for something nice.”

Just change them as a joke and watch the new meanings become fact.  I think it could make the world a better place.

So, I hereby proclaim the following meaning changes to common body language symbols:

1.     From now on if someone turns his butt in your direction and slaps it, it no longer means, “Kiss my ass!”  (Image not available) That is so mean- spirited.  It now means, “Hello good friend, if you need something, I have your back.” 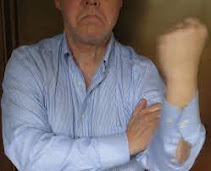 How mean is that?  It now means “You look younger, have you been working out?”

3.    From now on a raised clench fist no longer means, “Power to the people, fuck the establishment.”

That just stokes division and hatred toward one and other.  It now means “No matter who you voted for, I respect your opinion.”

4.    You know that back hand swiping the chin gesture that means “Yo, get the Hell out of here!”

That is so mean and not nice.  It now means, “Let’s have lunch sometime!”

Why, because I proclaim it.

5.    One more and this will really make the world a better place.  The traditional and universally accepted raised middle finger no longer means “Go fuck yourself!” 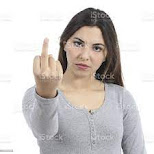 There is really no place in civilized society for that kind of aggressive language.

The raised middle finger now means, “OMG, even though you cut me off in your BMW, I still love you!”

I am sensing a Nobel Peace Prize.

If a mean-spirited racist group of people can proclaim the friendly, traditional “OK” sign to now mean “I hate people of color!” then mean ugly body language meanings can be changed to something nice.

How?  Just proclaim it!

Butt slap “Kiss my ass!” Now “Hello good friend, if you need something, I have your back.”

Arm slap fist-thrust’ thing “Up Yours!”  Now “You look younger, have you been working out?”

Raised clench fist “Power to the people, fuck the establishment.”  Now “No matter who you voted for, I respect your opinion.”

Back hand chin swipe “Yo, get the Hell out of here!”  Now “Let’s have lunch sometime!”

Middle finger salute “Go fuck yourself!” Now “OMG, even though you cut me off in your BMW, I still love you!”

If the “OK” sign can arbitrarily be changed into a hate symbol, then if we all get together, we can change traditional mean-spirited signs to be pleasant and nice.

All we have to do is just declare it.

Let it be written, let it be done!