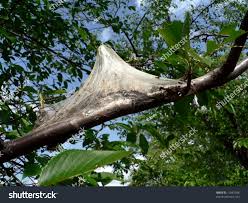 The Gypsy Moth is an invasive insect that feeds on and eventually kills valuable hardwood trees.  Around 30 or more years ago, they were very prevalent in the North East.  News reports warned that trees would die, birds would not fly, and the end of life as we know it was imminent.

Well, they were pesky.

Driving down major highways, every tree seemed to be covered by large white gypsy moth cocoons.  Stores sold sticky tape that people (myself included…hey, I’m a people) wrapped around their own trees to stop the caterpillars from climbing up and killing their trees. 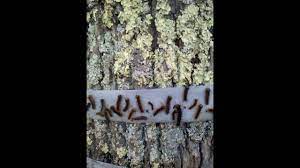 I’m not sure when, but seems like after a few years the moth scourge subsided.  Trees survived, birds still did fly, and life as we knew it was pretty much the same.  I often wondered what stopped the gypsy moth infestation.  Was it something like the Seventeen-Year locust thing?  Would they come back periodically?

I recently noticed that trees were again showing those white cocoons indicating perhaps the moth was making a comeback.  I did some research and found:

A population of gypsy moths will exist for many years in low densities. When the population enters the release phase, it rapidly expands to the outbreak phase where the population size will rise several orders of magnitude and fall back within only a few generations.

Upon further observation I realized those destructive cocoons were not really from the gypsy moth.  They were from Shop-Rite! 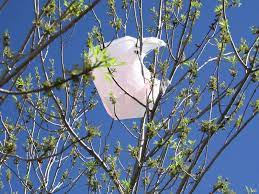 That’s right, the cocoons were actually those white plastic bags that stores hand you with every purchase from a pack of gum to assorted groceries.  People toss them and the wind carries them off and they get stuck in trees.

In New Jersey, ecologists and politicians are calling for an end to these plastic bags.