What Would You Do?

What Would You Do? 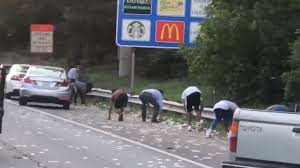 Last Tuesday the door of an armored car flew open on I-285 just outside Atlanta.  One hundred and seventy-five thousand dollars in bills scattered along the highway.


Dozens of cars pulled over, people poured out and gathered up the bills as fast as they could.


Apparently, the law says that those who scooped up the bills were guilty of theft.  Clearly these people could not be identified, even if their cars could be traced, how could it be proved they took any money, or how much money they grabbed.


More than likely most of the money will not be recovered.  I assume the loss is covered by insurance so the loss will be spread out among owners of the insurance company and maybe increased insurance rates.  Basically no one will be hurt financially very much if at all.


So…what would you do?


Pull over and gather as much as you can and keep quiet about it?


Pull over, gather money and return it to the police?


Pull over, gather money and return some to the police?


What would you do?


I might have just driven by without stopping.  All those people, all that money on a busy highway, it could be dangerous.


Maybe I would have pulled over and grabbed the cash.  I’m a pretty honest guy, but come on now!


If I did pull over and grab the cash, I think I would have eventually turned over the money to the police…guilt and all that.  So far people have turned over only $5000 out of $175,000.


Maybe I would have turned over the cash but kept a 10% finders fee.


I think I could live with that…maybe.


Tell the truth.  What would you do?