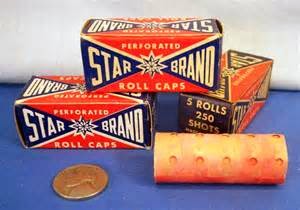 I don’t think kids have toy guns any more.  Well they probably exist, but I’ll bet in most places they are frowned upon.  Guns are bad.  Guns kill people and animals, and they break things.  Some people like guns.  They enjoy target practice and hunting.  My friend Frog is always trying to get to try skeet shooting.  Can't do it.

Guns scare me.
I probably don’t like guns because I was taught as a child to not like guns, right?
Nope.
When I was a kid I loved playing with toy guns.  I had toy pistols and toy rifles.  I played with other kids in the neighborhood.  We hid behind trees and garbage cans and shot at each other.
We didn’t just yell “Pow Pow” or “Blam Blam” or even “Bang Bang” though I do recall being able to imitate the ricochet noise we learned from watching westerns, we had caps and cap guns.  Stick’em caps were the most realistic but you had to reload often.  Roll caps were the best, kind of like real assault weapons. Oh how I loved the smell of cap powder in the afternoon.
We shot each other, we shot imaginary Indians (that would be Native Americans) we shot Japs (sorry, we still weren’t eating sushi in the fifties) and we shot wild animals along with “Rama of the Jungle” on TV.  My brothers had a BB gun.  They shot little rubber army men and an occasional bird.  I came from a family of toy guns.
I’ve never fired a real gun.  I don’t think either of my brothers ever fired a real gun.  My oldest brother once went deer hunting with some Navy buddies.  He bought a new rifle and other stuff just for the hunt.  When he had the chance to take down a deer he could not pull the trigger.
Actually I guess Jim did have to learn to fire a gun as an officer in the Navy, but I don’t think he ever aimed at anything other than a target.
Well there was that groundhog incident.  My mom had a thing against groundhogs, but Jim missed on purpose.
I remember my pop once shot a squirrel with his friend from Louisiana.  He was depressed for a week.*
What is your point Cranky?
I don’t know, for some reason I remembered cap guns and started to ramble.  Maybe my point is children’s toys and children’s games do not necessarily lead to similar behavior as adults.  Maybe it sometimes gets it out of their systems.
My point is not that hunting is bad, or that people should not have guns.  If I lived in the sticks I would greet every stranger coming down my dirt road with a “howdy” and a shotgun by my side.
So there; no point.  I don’t like guns; I loved playing with toy guns.
So what?
*Italics indicate a wondering mind.
Post familiar? re-run from July 2015
Posted by joeh at 11:12 PM