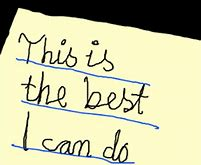 I don’t know if it is age or lack of practice, but my writing looks like a five year old’s, only worse.


I wonder if it is just me.


Mrs. C’s writing is notoriously bad and apparently always has been.  My handwriting has never been very good, perhaps because I write lefthanded, but currently it is awful.  It is not only awful, but I also write very slowly, forming each letter with great tongue-sticking-out effort and have great difficulty keeping the letters in a straight line.


Previously, even though my writing was bad, at least I could write fast.  My writing looked a little sloppy, but it was legible.


I suspect it is because I have been writing via keyboard for the last 30 plus years.  I do not write letters, I send email.  Almost anything I wrote at work years ago was on the computer and obviously my blog is done on the computer.


I think the only thing I actually write on with an actual pen is when I sign a card or fill out a check.  Apparently if you do not use a skill, you do lose it.  I wonder what else I can no longer do for lack of practice.


I can jog fast, but I don’t think I could run without injuring myself.  I wonder if I can still skip…I haven’t skipped in years.


I used to be able to throw a ball, not great, but OK.  The last time I tried, I threw like a girl, that’s right, I said it you feminists.  Actually I still throw better than most girls, except for my daughter-in-law who was a two time softball all-American and has a rocket for an arm.


I think I could still ride a bike, but only with both hands on the handlebar.  As a kid we would ride all over with no hands, steering by just shifting our weight, might be a bad idea today.


I can still kick a ball, but probably only half as far as I used to kick one.


There are some things that I can do that I didn’t used to be able to do.  I can do laundry, clean dishes, and even clean bathrooms, not often, but as a kid I had zero practice at these chores.


Use it or lose it they say, I guess that is why Mrs. C has me write all our checks.
Posted by joeh at 8:04 PM