The great thing about Christmas is, of course, getting presents.  Now we all learned that it is better to give than receive, and that is where my best gift ever comes.


The best gift ever is not expensive.  I have given fur coats to wives who have left me for someone else within the month…not such great gifts.  I have given jewelry which is nice, but it tires soon.  Gifts to children are wonderful, but within a week, they want more.


Keep in mind, I do not send cards, Mrs. C does, I only address and lick envelopes under protest.  I do not give gifts to anyone but close family and these days the gift is generally a check…and I am a little cheap.


About 7 years ago, I was perusing the internet and this silly item appeared, a “Leg Lamp.”  If you are a fan of Jean Shephard, or the Movie “A Christmas Story” you are familiar with the “Leg Lamp.” 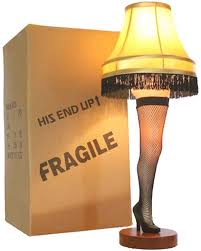 
Old friend Frog and I were fans of Jean Shephard long before his  movie became a classic, we were closet fans of his radio show.  Like many radio fans, we stumbled onto his story-telling show and late at night listened intently while parents expected us to be asleep.


Closet Shephard fans only discovered that others also listened by chance.  A casual mention of something and


Anyway, I saw this ad for a “Leg Lamp” and thought,


Without telling him I ordered one to be sent to his home before Christmas.


When he received it he was excited.  His children were excited.  His wife tolerated it, and every year since he ritualistically pulls it out and places it in his front window.  He also sends me a picture of it on Facebook to let me know the tradition continues.


Stupid little lamp…cost maybe $30, but every year, it makes a friend happy, every year it brings back good memories, and every year I get thanked again which makes me happy, so it is the gift that keeps giving and it might be my best gift ever!


For more on Jean Shephard read


“The Greatest Story Teller Ever”