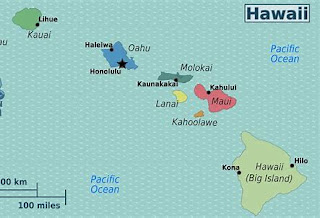 The first stop on our cruise was Maui.  We took an excursion to see what an old plantation might have been like.  We learned how to open a coconut, and we saw local fish at an aquarium.


We next went on a Maui whale watch.  If you have never been on a whale watch, let me tell you how they go based on over four different whale watches in several different places that I have been to.


Typically, 60 people go out in a large catamaran where they are served chips and crappy rum drinks.  The captain spots a puff of spray from a spouting whale and you race like crazy to that spot.  If you are lucky you see a tail as the whale dives, maybe to reappear in about ten minutes, and if you may a bit of it when it surfaces before it dives again.  It is still kind of exciting as these are magnificent animals.

On this watch we quickly saw a spray from a spout.  We raced over to see three, maybe four Humpback whales.  The captain advised we had to stay 100 yards away by law, but the whales didn’t know the rules.  They swam up to the boat.  They stayed close and we could see them underwater up close.  The captain cut the engines and we drifted for a half hour as the whales surfaced, rolled, spouted, gave us the flipper and wagged their tails all up close and personal.  How close?  Several times I was soaked as they blew spray out their blow hole.

The captain and crew were as excited by this rare show as were all us patrons, so I am pretty sure this was not an everyday whale watch.


The next stop was Hawaii or “The Big Island.”  This is where the active volcano caused so much destruction last spring and summer.  We took a tour of this currently quiet volcano, basking in a steam vent, and viewing the crater.  Our guide related that her home was almost lost in a lava flow.  She only was able to move back just a few weeks ago.  The Hawaiians seem to have ambivalent feelings about the volcano.  They fear the destruction, but respect the fact that it is the volcano that created the islands.


The second day on “The Big Island” I took a deep-sea trip.  I was hoping to catch some mahi mahi, or some reef fish, but apparently, we were deep sea trolling for 300 to 1000-pound blue marlin!  I boarded with two other cruisers and were instructed in how to fight one of these behemoths.


I was excited about the prospect of just seeing such a fish hooked, and was a little scared to maybe be in the chair fighting one.  Turned out there was nothing to fear.  We trolled for four hours and saw only bait fish jumping.  The captain claimed two Marlin almost took the hook, but I never saw them.


It was a nice boat trip, but after a big build up it was a bit disappointing.  Other cruisers on a different boat were luckier, they hooked two and landed one, a three hundred pounder which was safely released.