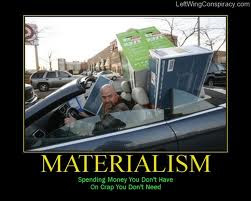 
Our car (not plural) had roll-up windows and no air conditioning. It had brakes that had to be stomped on to stop and steering which took a two-hundred pound man to parallel park (note to Microsoft Word- parallel is not the name of a park and does not need to be capitalized). The clock was analog and did not work. The radio was AM only. Still, we were happy. Why? Because no one had a car with power windows or air conditioning; clocks were all analog and never worked in a car, no one had FM radio in the car, and power brakes and steering were still not invented.


We had one telephone. It was all black, it had a rotary dial, there was no call waiting, no caller ID and calls outside of your area code (wait, there was no area code either) calls outside your county were long distance and cost more. Cell phones were a Dick Tracy wrist radio pipe dream. GPS was Dad with a map. Even so we were happy. Why? Because one phone was enough, call waiting is annoying, you could hang up when you lost the nerve to ask a girl out and she would not know it was you, and we didn’t know anyone outside the county. Cell phones tie you down. Dad with a map was as good as any GPS and he never had to recalculate.


The Tully's countered with a power lawn mower, the Newman's got a car with power windows, brakes and steering. Dad got a new stereo and the neighbors' “high fidelity” systems were to be pitied.


Thus the battle of stuff goes on. No one is any happier for all the new stuff; everyone is actually less happy until they catch up in the battle of the stuff.


If there is any value at all in becoming a cranky old man, it is stuff becomes less and less important. You have some new stuff that I don’t? Cool, look at me I’m still above ground! You can watch any movie on a portable device at the touch of a button? What will they think of next? Hey, look at me; I’m fucking breathing! You can download any song in seconds and store thousands of them in a cigarette sized box. Wonderful. I can whistle any song I want for free! Your car has a sun roof, backup camera, i-pod deck, hands free cell speaker system, satellite radio and a drop down TV in the back for the kids? That’s fantastic, watch this: I can still get out of bed in the morning!


I don’t really need any more stuff. I am very happy with the stuff I have. The stuff I have is way more than any stuff I grew up with, and as far as I know, the Newman's or the Tully's don’t have any of this stuff.
Posted by joeh at 11:07 PM