Crabbing Is Not Pretty!

Crabbing Is Not Pretty! 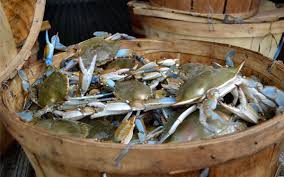 I love watching the reality TV show, “The Deadliest Catch.”  I think this is the only reality TV show that actually is mostly real.  The show follows several crabbing boats out of Alaska in the quest for crustacean gold, King and Opilio Crab.


I suppose part of my interest in this show is that my entire family and I were once crab fishermen.  Not exactly to the extent of the crabbers on the TV show, but I do feel a certain kinship.


My parents retired in the 70’s to a creek off of the Chesapeake Bay on the Eastern Shore of Maryland.  Anyone who lives on the eastern seaboard knows that the “Bay” is famous for its blue claw crab.  Steamed fresh with a generous dose of “Old Bay” seasoning, the blue claw crab is a tasty feast fit for a king.


The line was baited about every five feet with a piece of dried eel.  Loading the line with bait and placing it in a large bucket in preparation for running the line was rather sloppy.  Dried eel gets stinky and slippery and disgusting.  This is where I get this posts title.  Preparing a line with a friend who had never crabbed with a trot line before, the newbie complained about the eel mess.  He said solemnly, “Crabbing Is Not Pretty.”

It became a family mantra.


The crab line was slowly released into the creek, and stretched out a bit before letting it “soak” just like on the TV show.  After a good soak the line (100 yards was the legal limit for recreational crabbers) was pulled in.  It was not actually pulled in; it was lifted onto a roller and slowly brought up from the bottom.  As the line went over the roller, crabs (they are not particularly bright creatures) would hold onto the eel and we would net them before they dropped off.  The line then rolled off back to the bottom.  At the end of a run we let it soak again before running the line.


This process went on all day in order to catch enough crab for the entire family (often 16 or more) to enjoy a proper crab feast.


An average trot line run would yield two or three crab.  A good run might bring in eight or ten.  My SIL, Judy, claims the record of 18 netted on a single run.  When the netting was hot it could get exciting in the skiff with crabs just flung into the boat and missing the bucket.  Crabs in the boat could get angry.  (We did learn interestingly enough, that if you turned a crab on its back and stroked its belly they would fall into a sleep state and be harmless to handle.)


The crabs had to be culled just like on the TV show. The shell had to be a certain size from point to point to be legal, smalls and females were returned to the creek to grow and or create more crabs.
Stolen from YouTube, here are some grizzled Chesapeake crabbers hard at work.


After a day of hard work crabbing, they were steamed, seasoned and enjoyed with corn on the cob and a beer or two.  The crabs are delicious, but they are sloppy to eat.  Traditionally a paper is spread over the table so after the feast it would just be rolled up with all the shells and guts and lungs (gills) thrown out in one quick clean up.