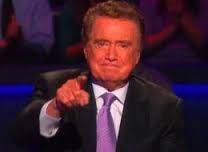 I recently had an idea for a post involving a superman question, then I realized I had already written one so instead of doing it over differently this cranky re-run is from May 2013


I used to like the TV quiz show “Who Wants to be a Millionaire” until they changed the format.  The old format gave a contestant who didn’t know an answer the opportunity to “Phone-a-friend” to get help.  I always said my phone-a-friend would be my friend “Frog.”


Frog (named as he once wore glasses reminiscent of “Froggy” in the “Little Rascal Comedies”) is my friend all the way back to high school and he is an expert in everything, especially history where he has a Doctorate (almost) in American History.  I guess I should call him Doctor Frog.  Anyway, the only problem with Dr. Frog as my phone-a-friend is his tendency to ramble on with facts not requested.  I have a recurring nightmare where I am a contestant on the old format of “Who Wants to be a Millionaire.”


“OK Cranky, you are down to your final question worth ONE MILLION DOLLARS.  Ready?


What is the name of the Master Sergeant in the Civil War who before the battle of Squeak Falls said, “Five minutes till hell boys, smok’em if you gott’em.”


“OK sure, we'll call Doctor…Frog?  Does he know history?”


“If he doesn’t know the answer, the answer doesn’t exist!”


“All right then we’re calling Doctor Frog…Hello is this Doctor Frog?”


“This is Regis of the Millionaire Show.  We have a friend of yours, a Mister Cranky, he is going for ONE MILLION DOLLARS and he needs your help.”


“You have one minute.  Here is the question”:


What is the name of the Master Sergeant in the Civil War who before the battle of Squeak Falls said, “Five minutes till hell boys, smok’em if you gott’em.”


“That is an easy one Regis; it just happens that in 1974 I wrote a thesis on that very person.”


“Yes; the battle of Squeak Falls was very important.”


“If the South won that battle, they would secure their supply lines for…”


“As I was saying, they would secure very important supply lines for their march toward…”


“Yes Regis, I’m going to guess that I will have to friggin kill Doctor Frog!!”


I always wake up in a cold sweat.

Actually, I was once the phone-a-friend for Frog.


Frog had an argument with his then girl friend, now wife, Hilary.  At 2 AM one morning I received a call from Frog,


“Jowles*, I need you to settle an argument.  I’m here with Hilary…”


“Never mind that, here is the question.  When Superman changes into his Superman outfit where does he put his civilian clothes?”

And THAT, Doctor Frog, is how a phone-a-friend answers a question!