No Good in the Clutch

No Good in the Clutch 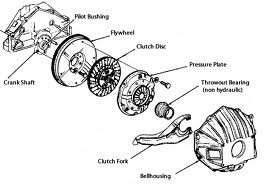 In 1990 I leased a new Jeep Wrangler.  I loved the Jeep Wrangler, it was no frills yet it had a certain “cool” factor.  I felt it was a safe car for my kids to drive, not so much power that they would be tempted to speed and showoff, but cool enough for a high school kid.  I leased the car because I couldn’t afford to buy it outright.  I could afford the lease, but money was tight.


The car ran fine for a year until there was suddenly a problem with the clutch. The car simply would not shift past second gear.  Reverse was not even an option.  I probably should have had the car towed to the dealer for service, but that would have been expensive so instead I drove it twenty miles in second gear.  I took it to the dealer because I assumed the problem would be under warranty.


The clutch needed to be replaced.  It was apparently completely shot.  Of course it was not under warranty.  The drive chain was covered (whatever that is) the steering was covered, the tires were covered, and the electric was covered.  Everything on that car was covered by a warranty; everything but the clutch.


A new clutch cost $600 a major dent in my meager bank account.  Of course it had to be replaced; the car was only one year old.  At this point I wished I had brought the car to my regular mechanic, Tom at the Volk’s Shop (see “The Volk’s Shop” http://joeh-crankyoldman.blogspot.com/2013/02/the-volks-shop.html) which was only one mile from my house.  Tom generally fixed anything and never charged me more than $300.  Oh well, a clutch was a clutch and sure to cost at least $600 even if installed by my favorite trusted mechanic.


Exactly one year later the jeep once again would not shift past second gear.  Crap!  This time I drove it over to The Volk’s Shop for Tom to fix it.


“Ah'm not sure, it just doesn’t want to get out of second gear.”


I walked back home trying to figure out how I would get the money to pay for a new clutch…again…and cursing that friggin Jeep under my breath.  When I got home Tom had called.  He was probably giving me the bad news and checking if I wanted to spend the $600 on a new clutch.


I called him back.


“Yeah, your clutch cylinder has a small leak.  I could replace it for $137.48 (the man was always precise) but if you just added fluid every year it would probably be OK, it’s a really small leak.  It cost $2.97 for fluid, no charge for labor, didn’t take but a minute”


This was great news, $2.97 not $600.
When I picked up the car, I had to ask Tom,  “Tell me Tom, any chance the cylinder was damaged when the original clutch was replaced?”


“Doubt it.  That there clutch is the original.”

That clicking sound is the light bulb over my head turning on.


One week from the time that Tom made it abundantly clear that the Jeep dealer had completely ripped me off, the Jeep dealer burned to the ground.  It burned down one year and a week after they charged me $600 for a new clutch when all they did was add clutch fluid.


No…I didn’t do it…I’m Cranky, not crooked, but the dealership had either burned down by some unfortunate accident, or more likely, knowing them to be unscrupulous, they were losing money and it was torched for the insurance.