THE USA NEEDS A KING

THE USA NEEDS A KING 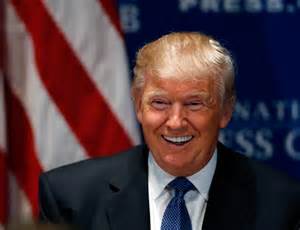 Donald Trump just announced he was running for President.  I don't think he would make a good President, but from "I Used To Be Stupid" I think we should make him King of the USA.  This was written about three years ago, but I think it is still a terrific idea.
The other night I was watching a show about the UK and their Monarchy.  At first I was thinking that a Monarchy in a modern democracy was absurd, but on further reflection it occurred to me that we need a King in the USA.


The President of The United States is very busy.  He leads and inspires the country in good times and in bad times.  He makes decisions on the economy.  He works with and compromises with Congress and the Senate.  He appoints judges. He campaigns for legislation he wants passed and government officials he wants appointed or elected.  The President is on call 24/7 to make decisions on International issues and in dealing with emergencies.  His opinion is solicited and put under a magnifying glass on every subject from Terrorism to whom he favors in the Super Bowl.
In addition to all his duties and responsibilities, the President is also the figure head and representative of our country.  He hosts State Dinners for every dignitary from Russia to Timbuktu.  He represents the USA at funerals, and at every tragedy it is the President who tells the world that “Our thoughts and prayers are with the people of Blah Blah Blah during this time of great difficulty.”  The president has to travel the world to shake hands with other leaders and wave to foreign populaces in order to send a signal to the rest of the world that the USA supports the country and people of the great country of Whatever.
Our country needs a figurehead and representative for all these mundane functions, but does it have to be the President?  Does it have to be the busiest man in the world?  No.  These functions should be handled as they are in the UK.


The USA needs a King.
This should not be an elected position.  It should not be a political appointee.  The King should be a person universally adored, admired, and feared.  He should simply step into the position and be anointed based on his kingly attitude and kingly sense of entitlement.  The title should be passed down to the heirs of the king, thus creating a whole class of princes and princesses, lords and ladies, and dukes and duchesses.  This new class of privileged based on birth alone would give the country a family we could safely hate.


Our country needs a figurehead to assume the tasks of representing our country to the world, and a group to absorb the hate and disenchantment currently thrust on the president for issues over which he has no control.


Our country needs a King!


Donald Trump should be King of the USA!


King Donald's  entrances would be preceded by his “Money Money  Money” theme.

King Donald would not need a crown, his hair-do would suffice.  He would not need Air Force I, he has his own planes and helicopters.  King Donald has golf courses and enough real estate fit for….well….a King.


“The Donald” has two ex-wives and a current wife 25 years younger than he is.  He has three grown children, Donald Jr. the heir apparent to the throne, Ivanka, and Eric by his first wife.  There is a daughter, Tiffany by Marla Maples, wife number 2, and 8 year old Barron with his current wife Melania.  With all these off spring and given his own past, there is plenty of opportunity for drama and controversy from the new royalty.


This will take the pressure off the President and his family.


Who cares what the first lady is wearing,  it will be Melania under the microscope.   What are the President’s children up to?  How boring compared to an 8 year old Prince Barron chasing third grade girls around the playground.


What world leader would prefer a meeting with a boring President of the United States, when he could be shaking hands with King Donald and posing for pictures next to Queen Melania?


King Donald would create the controversies so in demand by the media.  King Donald  would handle all the pomp and circumstance.  If there is a need around the world for an effigy burning, let it be King Donald.
Three cheers for “The Donald”.


SHAPE UP, it's never too late