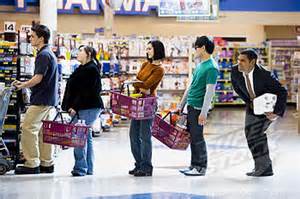 There is something about a trip to the supermarket that almost always gets me in trouble.


Generally it is the ladies that refuse to mind their carts.  They always find a way to block the aisle I want to use, and hemming and hawing does not get their attention. I suppose I could nicely ask them to move their cart, but I just feel as they should be aware and look out for other shoppers.  To me it is an act of aggression to block the aisle and I should not have to point it out to them.  Instead I try to sneak by and fail, rattling their cart or their backside and then mumbling an apology.


“Oh, I’m sorry, I didn’t see your cart, I guess I just didn’t expect to see a cart unattended in the middle of the aisle.”


The other activity that gets my blood boiling is the coupon ladies.  Why do I always get in the checkout lane behind a coupon lady?  They pull out a fist full of coupons and then proceed to argue over half of them.


“Please call the manager; it should be interchangeable between brands.”


Today I ran into a new battle at the 15 item or less line.  Oh I’ve had some battles here as well.  I always count the number of items the person ahead of me is purchasing.  If there are 16 items it pisses me off, though I seldom say anything.  I might mumble or cough “sixahemteen.” And I don’t count three identical items as one, that is bull shit.  Three items is three items.


Anyway, today I encountered a new 15 item or less battle.


At my Shop-Rite there are two 15 item or less lanes.  The lanes are not separated into distinct lanes, and it is easy to jump from cashier to cashier.  Now to me, you should choose a line to a specific cashier.  If one line happens to move faster than another and you pick the wrong line…too bad.


Apparently the tradition at this market is to form one line and then move to whichever cashier finishes with a customer, much like the snake line at a bank.


Today I am was line with three items, eggs, bacon and yogurt.  In front of me was an old bald dude with a strange accent and behind him is a dude with neck to ankle tattoos, a Duck Dynasty beard, spaghetti arms and one of those size 32 inch waists that still has the beer belly bulge.
Tattoo Dude was arguing with Foreign Man because he wanted Foreign Man to choose a lane.  Foreign Man was trying to explain the lane protocol, and Tattoo Dude was having none of it.

The argument started to get heated and Tattoo Man turned to me for support.

“He gotta pick a line right?”


“Well I’ve been here before and that is how they usually do it; personally I don’t give a damn.”
Tattoo Man is now pissed off at me.

“Are you kidding me, you siding with this fool?  Are you an idiot too?”


I might have changed my tune and agreed with Tattoo Man, but his spaghetti arms and pot belly told me his bluster had no backing.
“You know what, it’s like I said I really don’t give a crap, but I gotta tell you, if I was looking to get into a friggin fight today I would have gone to a biker bar, not a sissy-ass Shop-Rite.”


At this point, a cashier freed up, and Foreign Man moved up to check out.  Tattoo Dude moved behind the person at the other cashier and I fell in behind Foreign Man.
Tattoo Dude turned his attention to Foreign Man and mumbled a lot of smack; Foreign Man stood his ground and answered back with what sounded like gibberish.


I couldn’t help myself as the potential altercation seemed to be averted and I pointed out to Tattoo Dude,
“By the way your three cans of tuna count don’t count as one; you’re in line with sixteen items.”