GO TO THE END OF THE LINE

GO TO THE END OF THE LINE 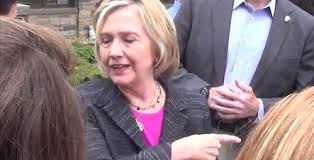 A cranky opinion for
CRANKY OPINION SATURDAY
The following is the opinion of a cranky old man with little knowledge on the subject opined.  Opposing opinions are welcome, but will probably be ignored.  As always, please, no name calling and that means you, you big stupid head!
I am not a big Hillary supporter.  In fact I will not vote for her.  I don’t think she would make a very good President, though her husband turned out to do a pretty good job…when he was on the job.
Hillary is probably as qualified as anyone else, my main objection to her besides being a bit too liberal, is she is extremely polarizing.  This may or may not be her fault, but it doesn’t matter.  People either like Hillary or they despise her.  People either liked Bill Clinton or they despised him.  People either liked George Bush or they despised him.  People either like President Obama or they despise him.  Enough, I would like a President that everyone could at least like.  Disagree with maybe, but at least like the person.
Anyway, the real impetus for this post was an event that makes me wonder why anyone would want to run or this office.  I recently saw this headline from a pro-right paper, “Hillary tells autograph seeker ‘Why don’t you just got to the end of the line’”
Sounds harsh doesn’t it?
Then I saw a clip of the event.  Hillary is moving down a line shaking hands with a whole bunch of people.  You see this sweet looking middle age lady ask for an autograph.  Hillary with a nice smile pats her on the shoulder and tells her “Why don’t you go to the end of the line.”  When she says this, she points in the direction she is walking.  It seems clear to me that Hillary just wants to get through all the handshaking without stopping along the way to sign autographs but was perfectly happy to sign for this lady when she was done glad handing everyone.
I guess you could spin this to make her look like a bitch, and they did.  Fair?  Hell no!
Imagine everywhere you go, everything you do, everything you say is captured on audio and video and edited and spun to sell papers and make you look bad.
That is why I choose not to run and if elected I will not serve.
I still do not think Hillary would make a good President.
The preceding was the opinion of a cranky old man and not necessarily that of management…Mrs. Cranky.
Posted by joeh at 10:31 PM