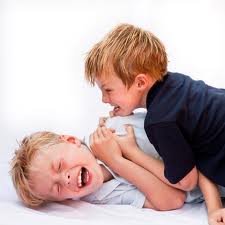 Stunt children, not my real grandchildren


There is much talk about bullying these days, but not much about sibling rivalry.  Some of the biggest bullies are big brothers.  I had two big brothers.  Jim six years my elder did not pick on me very much, he had Chris, who was four years older than I, to pick on.  I was Chris’ bullying target.


The bullying went Jim to Chris, Chris to Joe, Joe to….damn.  The thing about brothers is the youngest probably deserves to be picked on.  I know I was a pain in the ass to my brothers, and I also was horning in on their allotted time of Parental attention.


Another thing about brothers is that as much as Chris picked on me, I had a protector from other older kids.  Chris could tease and or torture me, but woe to the interloper who tried to join in on the fun.


Mom was no real help in limiting the bullying.  When I went to her to throw my brother under the bus she would say, “Oh just ignore him” or “Well just stay away from him then.”  Actually that was good advice, but I would not stay away, I always wanted to get in on the “big guy” stuff.


Chris never physically hurt me, he specialized in torture.  His favorite form of torture was the “lugee (a sticky glob of spit) slurp.”  Chris would get on top of me, pin my shoulders and arms with his knees, and then hang a lugee right over my screaming mouth.  At the last second he would slurp the lugee and laugh as I would nearly throw-up at the thought of him letting it drop.  Apparently Chris learned this trick the hard way from Jim.


On one disgusting torture session, the lugee dropped; right in my mouth.  Ewe…yuck…gag!  Chris laughed, although I think he was a bit grossed out himself, and I nearly threw up.  That was the end of that particular mode of torture.  The mere thought of a dropped lugee drove me to “crazy” strength and I could not be held down.


This summer, my oldest son, Mike, was visiting from Colorado.  We got to talking about the sibling rivalry between him and his older sister and his younger brother.  At one point, Mike started laughing as he told me, “The worst thing I ever did to Matt, was I used to pin his arms with my knees, and fake dropping a lugee into his mouth.  One day I slurped too late, and it went right into his mouth.  After that, I never had enough strength to hold him down like that again.”


The circle of strife!


When I baby sit on Thursdays for Matt’s two toddlers and I watch the interaction between these two brothers, I can’t help but think that poor Connor has a saliva slurpee in his future.
Posted by joeh at 9:30 AM