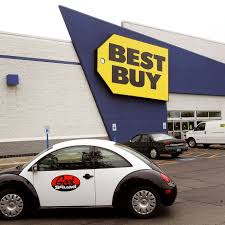 A couple of weeks ago I gave Wells Fargo an atta-boy for catching a scam charge on my credit card from Best Buy.  Wells Fargo saw something fishy and sent me an email request to confirm the charge. I denied it and Wells Fargo removed the charge, stopped my card and issued a new card.

The other day I checked my account and the same Best Buy charge hit again.  It hit on my new card number.  WTF?

I called Wells Fargo, and they contacted Best Buy for me.  Guess what, the charge was legit.  Except it sort of was not legit.

So here is what happened.  A few years ago Best Buy repaired a computer problem, and I also bought a new, cheap PC.  The cheap one was for my music stuff and was downstairs with my guitars.  The repaired one is for all other computer stuff.  Anyway, when I paid for the repair which was like $140, the Geek Squad Geek asked if I wanted the Best Buy purchase insurance.  The insurance cost $213.65.  When he told  me it would also cover the $140 I figured it was a pretty good deal.
That was two years ago.

Turns out when I agreed to that contract, I also agreed to it for every year as an automatic charge against my card.  I missed it last year, I don’t always check my card that carefully, or I just accepted it I don’t really remember…I’m old OK.

When the charge was explained to me I told the person that I don’t know what service I purchased EVERY YEAR, but I don’t want it any more.  They agreed to refund the charge and I have an email confirming they will.

Yes, I will look for it.

Number one: (My best Joe Biden Imitation) The Best Buy Geek, who must get a piece of the action when he sells a contract, should make it clear that the contract renews automatically every year.

Number B: When the charge comes due, Best Buy should send an email asking for confirmation that the service is still wanted.  This charge is $213.  If Someone is not aware it is going to go through, then that charge may cause an overdraft or an embarrassing card denial.  This is a world of high technology, send me an email or a text message for crispy sake!

Number Thirdly: When Wells Fargo turned down the charge and changed my card number, Best Buy went to Visa, and Visa gave them my new card number to bill me.  WTF?  Shouldn’t Visa just tell Best Buy that the old card has been replaced and they should contact their customer (me).  Yes they should, no they didn’t.

Nearly $500 to guarantee repairs on two computers, one two years old the other four years old.  One computer only cost $340.  I also had some internet protection, which I already have through both my cable company and Microsoft.

There are lots of these kinds of scams, just most are for smaller dollar amounts.  A few years ago, Mrs. C went through her VISA bill and discovered around 6 different charges she had agreed to that she did not realize were recurring every month.  Each was for around $5, an amount that is easy to overlook.

Anyway all is straightened out, I hope, but just a warning, when you buy with a card check your bills and beware of automatic recurring charges for services that you may not want.

As they said every week on "NYPD Blue", “Be careful out there!”