And The Verdict Is…

And The Verdict Is… 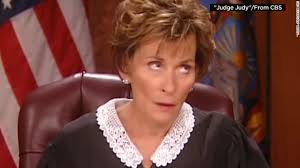 In the great scheme of things, given all the problems, sickness and death due to the pandemic, I am somewhat ashamed to complain about little things.

But complain I do!

Mrs. C and I were at home staying away from tiny red balls with spiky things on them and watching TV; specifically Judge Judy.

It was an interesting case involving one dick-head trying to get his deposit back from another dick-head who was holding on to a deposit mostly because the other person was a dick-head.

In other words, a typical Judge Judy case.

After arguing back and forth and Judge Judy beating up on both the plaintiff and the defendant, a verdict was finally about to be delivered.

The show goes to commercial.

“Which dick-head do you think will win?”

“The plaintiff is the bigger dick-head.”

“Yeah, but Judge Judy does go with the law, I think she will rule against the defendant, but still tell the plaintiff that he is a dick-head.”

Back from commercial and:

“Crap, could they just wait like five minutes, how important is this news?”

“Holy Shit, what is the news?”

“This just in, the space launch has been cancelled!”

“Oh no, not cancelled!  That couldn’t have waited five minutes?”

News 2 New York, then spent the next 10 minutes telling us what would have happened if the launch was not cancelled, and when the launch may next take place.

I sure would have liked to know which dick-head won their case, but at least now I learned of the space launch being cancelled as soon as it was cancelled, because waiting to learn of an event that I was not watching being cancelled would be horrible.

Clearly News 2 New York needed 10 minutes to tell their "Judge Judy" audience that a space launch was cancelled, because running one of those small printed messages under Judge Judy saying,

“The Space launch that you were not watching because you were watching Judge Judy instead has been cancelled.”

Yeah, I know, OMG Cranky, what a big problem…!!