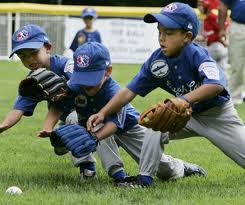 It is the start of another LL Baseball season.


This is dedicated to my favorite LL coaches; Ray Hanson of North Brunswick N.J. and Jamie Rivera of Metuchen N.J. Both represent to me the many dedicated parents who manage to balance teaching, competition and skills to kids while never losing sight of the fact that these kids are….well….KIDS!!


It is nearly the end of another Little League baseball season. There is still a summer league, but my son will not be playing baseball this summer.  At thirteen years old this is Spencer’s last year of playing Little League Baseball.  I went through five years of Little League with my son Matthew over twenty years ago.  Now my second time around as a Little League parent is about to come to an end.  It is a good time to share my fondest memories of this American tradition.


I have experienced many Little League horror stories,  coaches making kids cry, parents making asses of themselves arguing with umpires half or a third their age.  There have been kids with a bad attitude, kids who are mean to other kids and many examples of bad sportsmanship which were particularly uncalled for in a “children’s game.”  I choose to forget all the bad things that sometimes come out of Little League, the good stuff far outweighs the bad.  Here are three of my favorite Little League stories.


When my son Matt was ten, his team made it to the division championship game.  At ten years old, every fly ball is an adventure, every at bat a challenge.  On this team there was a little boy who at age twelve was such a poor player he was forced to play with the ten year olds.


I don’t remember his name so I will just call him Ralph.  Ralph knew he was a bad player, but he loved the game.  I’m not sure Ralph could even see.  He wore coke bottle thick glasses and it seemed he sometimes had trouble even finding his glove.  He never complained, never argued, never threw a bat, and he always hustled.  Ralph always tried his best. He was always smiling.  He was always happy.  In twenty-five games, Ralph never hit a ball into fair play, and he never caught a fly ball.


The ball was hit directly at Ralph.  If he dropped it, two runs would score and our team would lose.  If he caught it, the game would be over and our team would win.  Ralph did not move one inch.  He stood with his hands at his side as he followed the flight of the ball. Everything was moving in slow motion when at the last second (my apologies to the Steve Martin movie “Parenthood” which came several years after this event) Ralph stuck out his glove.  The ball dropped in the pocket, Ralph closed his mitt trapping the fly, and in one motion with his right hand he grabbed his hat, swirled it in the air, brought his arm across his belly and made a perfect bow to the cheering crowd of 55 parents and siblings.


It was the only fly ball Ralph had ever caught in his life.  It was probably the last fly ball chance he would ever get, and Ralph caught it with panache.  I loved that catch, I loved that kid!


When Matt was twelve, he umpired games for the younger divisions.  At eight dollars a game this was a great gig, but umpiring games coached by sometimes enraged parents was not always easy.


I went to one game to give Matt a ride home after he was done.  I arrived in the last inning of a one run game just in time to watch the game’s final batter strike out on a swinging foul tip to the catcher.  The pitch was inside and it appeared to have grazed the batters fist on the swing.  Matt called the batter out, and the manager ran onto the field.  “It hit his hand, it hit his hand, he should get first base!”  The manager screamed.


Matt made a foul tip signal, and replied firmly, “All bat coach, all bat.” That explanation seemed to satisfy the coach; game over.


When Matt got in the car, I asked him if the pitch hit the kid’s fist or not. He replied, “Oh it hit him, but I am pretty sure that when you swing the hand is considered part of the bat and the strike out stands.  I didn’t want to get into it with the coach, so I just said it was all bat.”


Until that moment, I did not know if Matt was particularly smart or not. With this one umpiring call I realized he was not just smart, but quick on his feet as well!


By the way, the hand is considered part of the bat if you swing.


Before the start of each season, players go through a tryout.  Coaches evaluate each player before they decide who to choose for their team. During one of these tryouts I got to talking to Ray Hanson, one of the managers.


“I see you make different notations after each player, what do they mean?”


“Well it’s hard to remember each kid, so I just jot down different notes. For instance “gf” means good fielder.  If he can throw I put “ga” for good arm.  Good hitter gets “gh”.  If he runs fast I put “gs” for good speed.


“That?  That’s my tie breaker when two kids are close.  “GLM” stands for Good Looking Mom!”

I am going to really miss Little League Baseball!