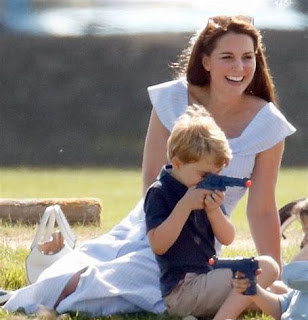 Princess Kate and young Prince George
I was just reading an article about children who play with toy guns. Several experts had studied whether or not toy gun play leads to later violence.  The answer depends on which expert was asked.


When I was a young crank, I played with toy guns all the time.  I had cap guns that fired rolls as fast as you could pull the trigger.  I had toy pistols and rifles.  My friends and I played cops and robbers and cowboys and Native Americans almost every day.  I watched westerns with tons of gun fights, and police shows where the bad guy was told to “Stop or I’ll shoot” and if he did not stop, he got shot.


There was lots of violence on TV and lots of play violence in my yard.


I have never fired a real gun in my life…never wanted to, probably never will.


My older brothers had a Red Rider bee-bee gun.  They shot toy soldiers and targets.  I think one of them may have shot a bird once.  That event cured both of ever wanting to shoot at anything except inanimate objects.  I don’t believe either of my brothers ever shot a real gun.


Wait…My mom got a 22 rifle because she was afraid the ground hogs were destroying her property and her house was going to fall into her creek.  Jim did fire that gun at the ground hogs.  He only fired to scare them and make mom happy.


I have three sons.  They all had toy guns, but not, as I remember, as many as I had.  They probably had more water pistols, and nerf bullet guns than cap guns.  To my knowledge none of them have ever actually fired a real gun.


My daughter never played with toy guns.  She is married to a retired Army Ranger.  She has fired a real gun, but only at targets and skeets.


I am not an expert, but I do have opinions.


In my opinion playing with a baseball does not make a child grow up to play for the Yankees, learning to ride a bike does not lead to the Tour de France, and playing with toy guns is not a gateway to mass murder.


Personally, I do not like guns but I do not believe there is anything wrong with children playing with toy guns


I will admit that in todays anti-gun climate, I would probably discourage my children from playing with anything other than a water pistol.  It is not worth getting neighborhood lectures or drive-by stink-eyes!
Posted by joeh at 12:53 AM